On Wed 7/14 I took off for Sequoia National Park.  I really wasn’t sure where I was going until I talked with the Park host and he recommended Kennedy Meadows.  I won’t have any cell service once I get up there, which means no Internet or telephone.  I loaded up with water and filled up with gas and off I went.  The road is called 9 Mile Road which means the distance up the mountain.  This is the start just off 395.

The climb is over 6,000 ft in just 9 miles.  Needless to say it is very steep, no guard rails, and at times it narrows down to just one lane.  But the Lazy Daze handled perfectly.  It never heated up even though part of the way I had the AC running low because it was so hot.  I couldn’t find the campgrounds for Kennedy Meadows so decide to go tho the next camp about 8 1/2 miles further.

Her I am entering the Sequoia National Forest.

I came to a turnoff called JackAss Flats.  Being the jackass that I am I decided to take it even though I knew nothing about where it would go.  This is the road at the beginning. 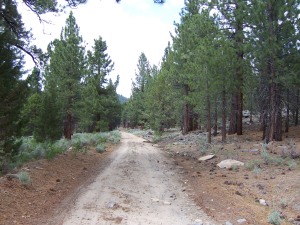 It got even narrower and a lot more bumpy so at the first opportunity I decided this wasn’t a good idea.  This is as far as I got.

I then went out the jackass way I went in and in less then a mile I was at the Fish Creek campgrounds.  I spoke with one of the forest service workers about getting a Golden Age Pass.  For $10 it will cut the camping fees in half.  I went to the Information lodge about 3 miles up the road, purchased my pass and returned to the Fish Creek campgrounds.  No sooner had I found a spot and put my fee in the box, it started to rain.  It came down in buckets.  Later that night it began a lightening storm that I have never seen the likes of.

Here is my site for the next four days…

I shared it with dirt bikers as well as there were trails all throughout the area.  It was noisy the first 2 days but they all went home on Sunday and I practically had the place to myself.  It was very peaceful.