The Mazama Village Campground where I stayed for several days was about 7 miles from the lake itself.  The final day after checking out I ventured to the lake and drove the highway called Rim Drive.  It is 33 miles long and circles the lake.  That should give you some idea how big the lake actually is.  Crater Lake is the deepest lake in the United States.  At one point it is 1,943 feet deep.

This is a huge waterfall on the Rim Drive on the way to the lake. 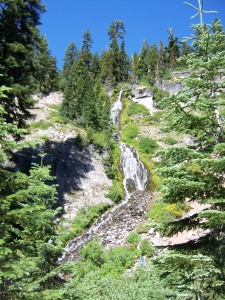 This is the type of scenery you see everywhere up here in Oregon.  The forests go on for miles and milers. 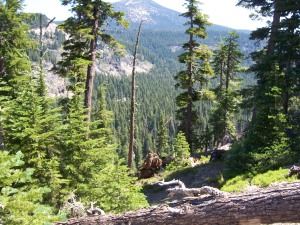 Finally at the lake.  This is a picture of what they call Phantom Ships.  It is part of the rock extending above the water.

Looking through the trees I was able to capture this shot of Wizard Island.  You can actually go out and hike on the island.  But there is one problem.  You have to take the boat tour which will drop you off on the island and later pick you up.  In order to take the boat tour you have to hike down to the boat landing.  It is a strenuous hike of about 2 miles but elevation gain on the hike back is 700 feet.  There is no other way.  I decided against that.

Another view of Wizard Island. 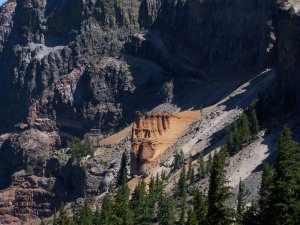 The most beautiful think about Crater Lake is the color of the water.  The blue is a much deeper blue then I have seen anywhere.  It is a much deeper blue then the sky and the sky was also a very beautiful blue.  I hope you can see the difference.  One thing that is very unusual about Crater Lake is that the water does not leave the lake at anytime.  There are also no creeks that flow into the lake as well.  The lake does evaporate some in the summer but then fills back up when the snow melts.  I believe it has only been completely frozen over one time and that was many years ago.

So there you have Crater Lake.  There is much to see and do there.  I went to several ranger talks at night where they show slides in their outdoor amphitheater.  It was very educational.

4 thoughts on “crater lake, or”