Happy Birthday to me.  BIG DEAL !!!  I decided to try out the Willamette National Forest campgrounds.  I turned in to a campground called Paradise.  Wow !  How aptly named.  It looked like a giant rain forest.  There was moss growing on all the trees and almost everywhere you looked.

I did enjoy a birthday wish from my Mom.  She was out at a restaurant with my sister and brother-in-law.  It was really nice talking to them, but I still don’t think my Mom realizes what I am doing.  She keeps asking when I am coming home.  I also got a birthday wish from my friend Millie who I called back.  It is hard at times when you are on the road to talk to others.  Many of the times I will be camped where there is no cell phone/internet connection.

When I pulled in I almost thought I wouldn’t get a campsite.  Many of them were reserved and a lot were being used.  I drove through the park and found this gem and nabbed it right away.  I then registered for 3 nights.  As it turned out the whole campground had 64 campsites and I only believe about 5-6 were being used.  This campground had a later checkout time (2:00pm) so people were taking their time to go home. 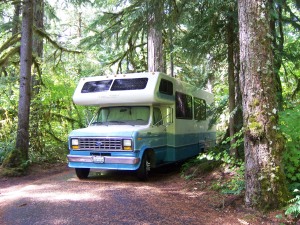 The group next to me was just leaving and he was nice enough to offer me whatever fire wood he had left over.  He just mentioned that I would have to cut it into smaller pieces.  So I carry my Dad’s old trusty saw that he used in the early 50’s to create a fabulous upstairs bedroom for my sister Chris and myself.  I went to work on that log and TADA I had firewood.

Everywhere you look could see thick moss growing on the branches of many of the trees. 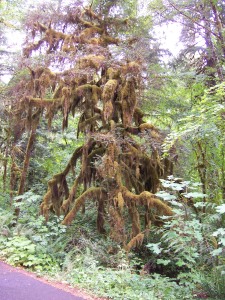 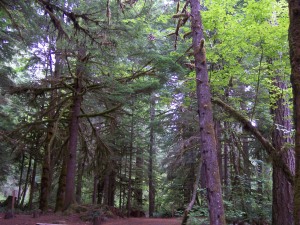 This is another picture taken out of my rig.  Not only was it wet outside but it was extremely cold as well.  Since I hadn’t stopped to refill my propane tank, I was running really low.  But I needed the propane to run my refrigerator and cook as well, so I didn’t want to use it to heat the furnace, which goes through propane pretty fast.  So my alternative was to bundle up with my long johns.  They did keep me real warm even though the temperature was in the low 50’s. 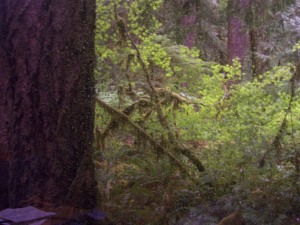 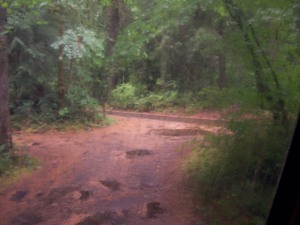 It finally stopped raining and I got to hike around the park but I was just glad to hit the road and get to Springfield to have my solar panels installed.

4 thoughts on “happy birthday old fart – i am in paradise”