After City of Rocks I decided to go back to the singles campground (LowHi RV Ranch) for a couple of days.  They have a potluck every Monday so I stopped at the Walmart Superstore and picked up a few items on the way.  I decided to stay there 2 nights so I could get in on the boisterous card games both nights.  I hadn’t been in the park more than an hour and I had people greeting me.  That sure is a nice feeling.

The potluck was delicious and the card games on both nights were very loud and fun.  During the day I cleaned up my rig and loaded up on supplies for the next 1 ½ weeks.  I am planning on staying in state parks with no hook-ups until I fly back to CA to spend Thanksgiving with my family.

I know $11.15 per night doesn’t seem like a lot of money but when I am paying nothing it seems like a lot.  I shouldn’t have to pay any more for campsites between now and my flight on 11/24.

The next day I headed out to Percha Dam State Park.  It was only a short drive of about 70+ miles.  Again they have both hook-ups and non-hook-ups and I opted for the later.  I found one site that looked pretty good and had lots of afternoon sun.  The next morning I got up and noticed that the sun was blocked by the trees.  So I moved my rig and settled in.

Here is a pic of the dam.  There is hardly any water running through it now.  (Be sure to double click on all pics to enlarge.)

There is a Sand Crane Festival going on further north of here in a few weeks and the sand cranes are going through this area one flock after another.  I took a couple pics of the flocks.  It was really neat.

It got very cold up there at night.  The temperature was in the low 40’s.  I was able to stay quite warm because of 3 things.

1.)    I dressed in layers (including long underwear) to sleep and had lots of covers.

The cab is not insulated and can let in a lot of either cold or hot air.  I used 2 blankets as you can see. 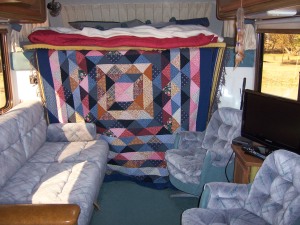 I took daily hikes while there.  This pic is of a chili pepper field.

While I was hiking down this road a truck passed me and kept on going to the end.  He later drove into the campgrounds and caught up with me.  He was very excited since he had seen a Golden Eagle near the end of the road.  Both Golden Eagle and Bald Eagle are common to these parts. 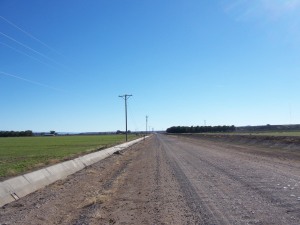 I liked this park very much, but decided to continue heading north to end up in Albuquerque by 11/24 for my flight out to California..