I spent the holidays with my sister Bev and her super husband Bob.  It was a great time although it rained almost every day.  Bev and I also took our Mom out for the day to Fashion Island where we had lunch and checked out the huge tree.  She really enjoyed that.  Also took care of a medical exam.

Two days after Christmas I headed out to Death Valley to meet up with Roger Nickey and a whole group of Lazy Daze owners who were having a rally.  They have been doing this annually for the last 14 years.  I got a late start and it took me hours to get out of the LA area.  I decided to stop at Barstow at a Flying J where I spent the night.  The guy next to me in a big Monaco Class A ran his generator ALL NIGHT.  I got up early to a little rain on the ground but decided it was OK to drive.  Finally made it to Death Valley. We were dry camped at Sunset campground just across the highway from Furnace Creek. 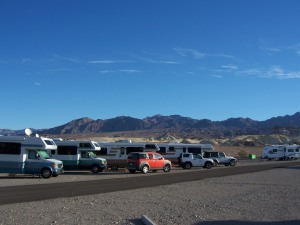 A good view of the snow on the mountains surrounding us.  It was cold and the wind was really blowing at times.

Roger under the Natural Bridge.  It was about 1/2 mile hike from the trail-head. 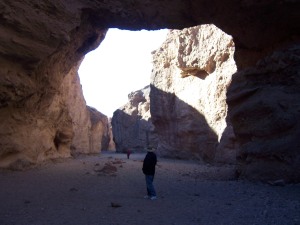 Roger drove us up to Dante’s View which was located about 5,400 feet above the valley floor.  You could see for miles.  Very cold and windy. 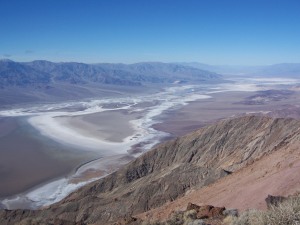 Jim  and his wife owned a Lazy Daze and just happened to be driving through the area near where we were camped.  We invited them to join us and they stayed for several days.  How ironic that he should run into us.  We all called him the “Bubble Man” cause he could make these giant bubbles.  He had a special bubble formula that would work with the Death Valley climate.  He let me try it too and it was really fun.

There was a Borax Museum in Furnace Creek that told all about borax and the Twenty Mule Team that used to get it out of Death Valley.  Right behind the museum they had a large display of all the old equipment used back in the late 1800’s.  It was really a neat display. 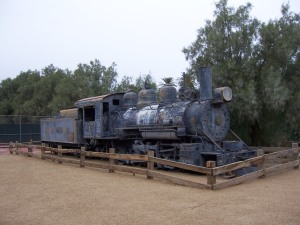 Where we were camped was 176 feet below sea level. 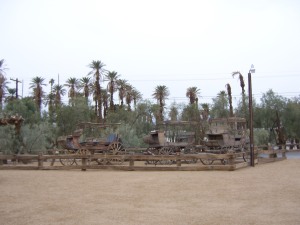 These are the wagons that the twenty mule team would pull.  The first two wagons were filled with borax and the third wagon contained water and hay.  The whole load weighed approximately 36 ton. 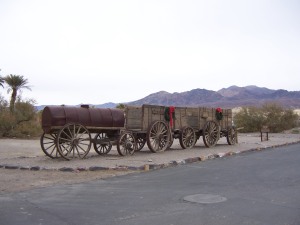 This is what it looked like the day we broke camp.  It was really cold. 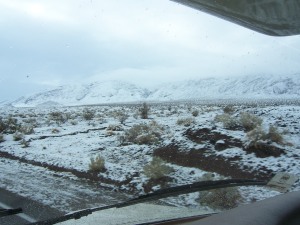 Finally I took this as we were heading toward Pahrump, NV.  It was snowing almost all the way.