Before leaving Anza-Borrego I got these last two pictures.  I had some rain on several days while there and the temperature was down in the 30’s at night.  This was taken after the rain showing snow on the mountaintops. 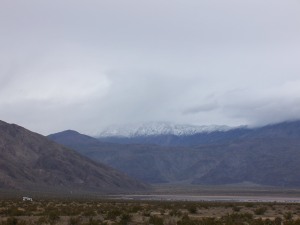 Prior to leaving I got this pic of my campsite with the snow in the background.

My next stop was Slab City, but first I stopped in Brawley to load up on supplies.  Slab City is an old abandoned WWII Marine Base that has been taken over by squatters and RV’ers.  You can read more about Slab City here.  It is located outside of the small town of Niland, CA on the eastern side of the Salton Sea.

When you first arrive you are greeted:

Then you get to Salvation Mountain. 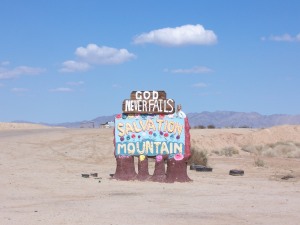 Leonard Knight is the creator of Salvation Mountain.  It is an ongoing project that has been in the works for over 25 years and more then 100,000 gallons of paint. 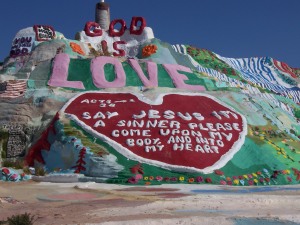 I followed the “Yellow Brick Road” to the top of Salvation Mountain.  This my view from there. 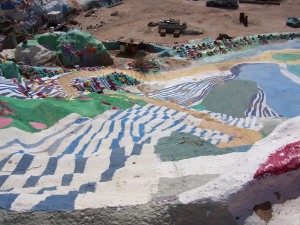 I also go a view of “The Slabs” from the same spot.

This is Leonard’s truck that he lives in.

I will tell you that when you first enter Slab City you are not impressed.  One of my friends who had only spent one night their described it as a “giant hobo camp”.  There are trailers, RVs, trucks and cars with tires so flat it appears they have not been driven for years.  Plus the trash is disgusting and everywhere.

HOWEVER, if you continue driving as I did (I am too curious for my own good sometimes), you will find a great camping area further out.  It is made up mostly of snowbirds that come here as early as Oct/Nov and then leave around Apr/May.  It is a nice clean area with lots of really nice friendly folks.

I followed the signs to the LOW’s group (Loners on Wheels of which I am a member).  I was told they have been located out here for over 25 years.  They have 4 permanent trailers and a large group area for dining and gatherings.  They meet everyday at 3:30 for Happy Hour.  Sometimes they show movies and they play cards in the evening.  One of the trailers houses a 2000 book library another trailer is used as a kitchen, one for the card games and one trailer for the movies.  In order to show the movies they have lots of solar panels and batteries set up.

One day I decided to walk around and see just what made up Slab City.  This is the stage that was used in a scene of the movie “Into the Wild”.  Nothing seemed to be happening the whole time I stayed there.

Not far from where I was camped there had been a alien crash as you can see.  Some pretty weird stuff.

This shows some of the area of Slab City when you first drive in.  This isn’t really too bad compared to some of the areas I saw.  I have seen some areas where the trailers and trucks had been completely gutted and only the frame showing.

Slab City even has some real classic cars that I doubt you could find anywhere else.  They are not exactly what my father would have considered classic but they are unusual just the same.  Check them out. 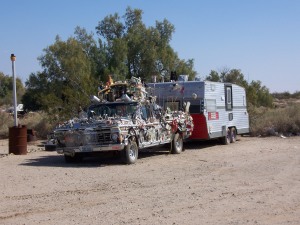 But they don’t stop at just classic cars.  No way!  Try a house boat on for size.  He had a sign on it for $49k.  At least he wouldn’t have any worries about a flash flood out here.

On the other hand here is a pic of my campsite for a week and my neighbor’s Lynn and Gloria.  As you can see there is no trash around.  Lynn and Gloria in the Airstream are an older couple in their 80’s but have been coming to the same area in  the Slabs for the last 19 years.  They were really nice people and I really enjoyed talking with them.

Another pic of my campsite.

This is where the LOW’s group met every day for “Happy Hour” and dinners on occasion.

I really enjoyed my stay at “The Slabs”.  I found a very nice site and met a lot of really nice people.  Plus it did not cost me anything to stay there.