The SW Lazy Daze group held their rally in Benson, AZ from 2/28 – 3/4.  It was really fun getting together with all my Lazy Daze friends.  I knew many of them but some were folks I met for the first time.  We stayed at the Pato Blanco Lakes RV Park where we had full hook-ups and lots of cable TV channels.

This is a great pic of the entire group taken by Gil. 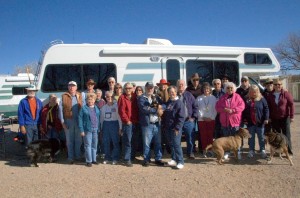 This is where we met for “Happy Hour” and all our meals.

On Wed about 20 of us went to explore the Kartchner Caverns.  We took the tour of the Rotunda Room.  This is a living cave where the stalactites and the stalagmites are still forming.  It is owned and operated by the State of Arizona.  You can read more about the Kartchner Caverns here.  We were not allowed to take any pictures but pictures are available elsewhere.

After touring Kartchner Caverns I rode with Steve and Lisa and we toured parts of Benson.  This is a pic of an historical house.

The following day Steve, Lisa and I drove down to Bisbee, AZ which is an old mining town.  It was founded in the 1880’s when it used to be known as “Queen of the Copper Mines”.  This is a pic of the downtown area with all it’s old shops.

This next pic is of the historical museum of Bisbee.  I toured it and it was very informative of the area and especially the mining.

The next few pics are of the Bisbee downtown section.  It was a very quaint town with lots of interesting antique shops. 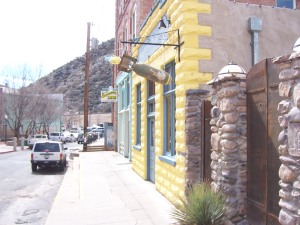 Back to the rally and people chatting around the food tables.

I enjoyed being with my many Lazy Daze friends.  Some I met at the Balloon Fiesta last Oct.  and others at the Death Valley GTG.  It was sure fun meeting up with everyone again and finding out all the neat places they had been and where they were going.  It gives me a long list of places to see and things to do.