My next stop was 177 miles down I-10 to I-8 to about 12 miles west of Gila Bend.  After getting off the interstate I drove about 12 miles to the campground.  This is a BLM campground with no facilities.  They did have nice big campsites with a large table.  I was only staying for one night and then on to the rally in Yuma.

Once I got settled into my campsite I decided to take a walk over to the petroglyphs.  These were quite different then any I had previously seen.  The ones I have seen in the past were on walls.  These petroglyphs were painted on individual rocks.

The rocks were spread over a very large area and many piled up on top of each other. 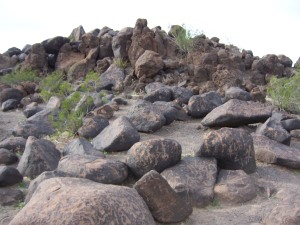 They even had a rock here and there that had been carved on by some people at the turn of the century.  I guess to let everyone know they had been through this area.   No brains, no headaches.

It was a big open plain where I was camped and the sunset was spectacular as you can see.

The campground host came by to invite me to a “Pancake and Sausage” breakfast.  The campground sites were $8 but I only had to pay $4 with my “geezer card”.  Not bad especially with a breakfast to boot.