The weather was really beautiful after all the wind we have suffered through.  But that is the way it is in New Mexico in the springtime.  The Leasburg dam was constructed in 1908 to channel water from the Rio Grande for irrigation in the Mesilla Valley. 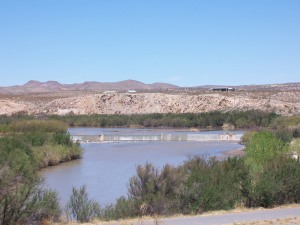 Amother view of the dam as I started getting closer.

As I got very close to the dam I saw a bridge where I could cross the canal to get over to the dam.  However, when I reached the bridge there were signs not allowing use of this bridge.  There was another bridge further up the trail where I was able to cross, but I did have to go under the guardrail.

Here is a couple of close-up views of the dam taken from one of the day camp areas. 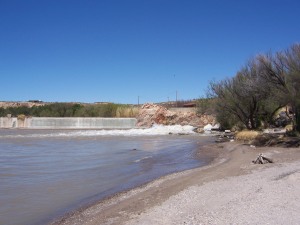 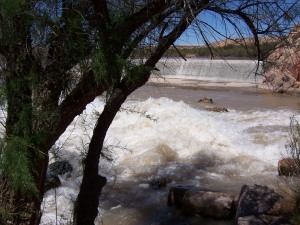 This is the day care area.  At one time the Rio Grande leading out from the dam was lined with cottonwood trees.  However the Tamarisk trees eventually took over simply because they use up so much water that there is not enough left for the Cottonwoods.  As you can see in this picture the park is planting new cottonwoods in this area.

A look down the bend in the river.

As I was walking along the trail, I cam upon this cave-like structure made from the roots of the surrounding trees.  It was matted down and looked like someone had been sleeping there.  Maybe a big bear.  HA HA!! 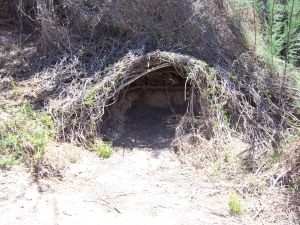 This was a great hike on a very nice day.  Tomorrow I will be traveling to Columbus, NM where I will cross the border into Palomas, Mexico to my dentist for teeth cleaning.  I went to her back in Oct. 2010 and was very pleased with her.

3 thoughts on “my dam hike (as in Leasburg Dam)”