On Sunday I decided it was a good day to hike up the Dog Canyon Trail.  This trail has been used by native people to move from the Tularosa Basin into the Sacramento Mountains for thousands of years.  There was a little cloud cover and the day was not too warm.  Plus I was sure there would be others on the trail as well.  The trailhead starts at the Visitor’s Center and the first 6/10th’s of a mile it has an elevation gain of 600 feet.  I am not used to hiking in areas with such elevation gain but I did make it to the saddle at Spring Canyon last week, but not sure about the elevation gain there.  But I was going to give it the old college try anyway.

This is a pic of the trail and what I was suffering through. LOL!! 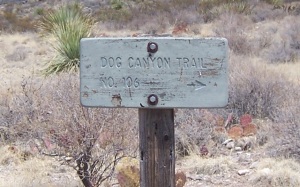 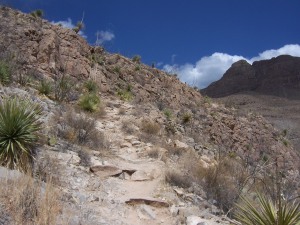 You actually enter the Lincoln Forest at the beginning of the trail although you are still in the desert. 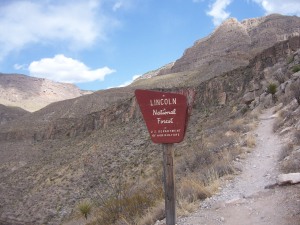 After much huffing and puffing and numerous breaks, I finally mad it to the first bench at 600′.  What a thrill.  I almost couldn’t believe I made it.  This is the view looking back toward the campgrounds.

From here the trail flattened out for a while.  I met other hikers coming down who had made it to the end of the trail.  Good for them!

You are continually getting higher and higher and the RV’s are getting smaller and smaller in the campground below.

At the 1.5 mile marker you could look down into the canyon on the left and view the sheer cliffs rising 1500′ on the right.

I had set a goal of climbing until it reached 2:00 pm.  I wanted to give myself plenty of time to hike back down through the steep section at the beginning of the trail.  I now regret my decision since the “Line Cabin” was only .9 of a mile further.  But there were switchbacks leading up to it as you climbed steeper.  So at 2:00 I reached the 2 mile marker, took a break and then headed back down.  Thinking back, I know I could have reached the cabin and had plenty of time to get off the trail. 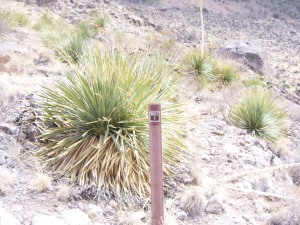 These are some views from the 2 mile marker.

As I am almost down I pass out of the Lincoln Forest and through the old gate that was put in many, many years ago. 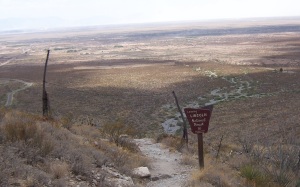 I made it down without mishap although going down was almost as hard as going up, just less huffing and puffing.  Next time I am through this area I will see about making it to the cabin and back or maybe even to the top.