I checked out the New Mexico atlas before leaving my campsite and saw a couple of things I would like to stop and see while traveling to Cimarron Canyon SP.  The first was a old ghost town called Dawson.  It was right off Hwy 64 at Colfax, NM.  The road is paved for about ¼ mile.  This is what the road looked like at first.  It doesn’t look like it is too well traveled.

Then it became a washboard gravel road.  I took this road for about 5 miles where I saw the Dawson cemetery.

It was very old.  I didn’t see any marker newer then 1920.  From what I understand this used to be a coal mining town and most of the grave markers were from coal miners who had died in the mines. 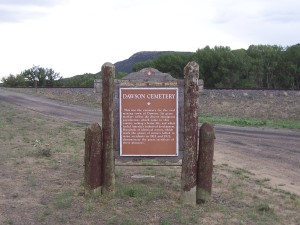 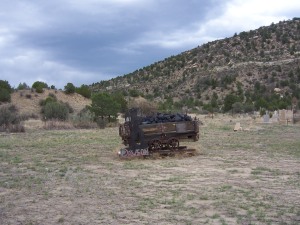 This is a pic of a sign showing who was buried there and where they were entombed. 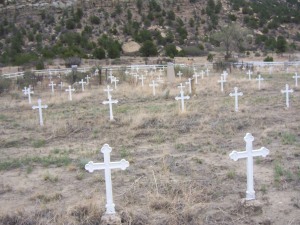 I was walking around the cemetery, when all of a sudden I heard a noise like someone was driving up.  I turned around toward my truck and I then heard a huge swoosh.  It was the wind blowing thru the canyon and it was getting very cold with storm clouds overhead.  I think those people in the cemetery were telling me that this was a good time to leave.  The road did go further, but I didn’t want to take any chances getting caught on that road if it started to rain.  I got to the end of the road just as the drops started to hit my windshield.

The next planned stop was the Philmont Boy Scout Ranch.  I was a Boy Scout for many years back in Detroit, MI.  (I know!  A great place to be from!!!)  I worked very hard and took scouting very serious and eventually earned my Eagle Scout badge.  All the while I was a Boy Scout I always dreamed of being able to go to the Philmont Boy Scout Ranch.  It was a dream that I was finally able to fulfill today!  It took 50+ years to get here, but I finally made it.  Boy Scouts have changed a lot over the past 50 years and it was fun touring the Philmont Museum and seeing all the same old equipment I had when I was a scout.

The deer on the ranch did not seem to be afraid of anyone.  The Boy Scouts must be taking good care of them. 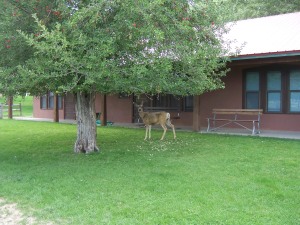 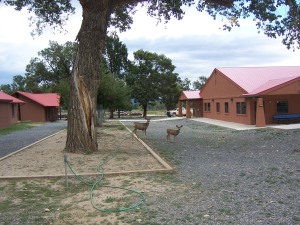 I even purchased a used Boy Scout manual that I used when I was a member of the Boy Scouts. I am sure those of you who were scouts back in the early ’60s will remember this. What a trip!!  I paid $15 for it and it originally sold for $1.  How times have changed!! 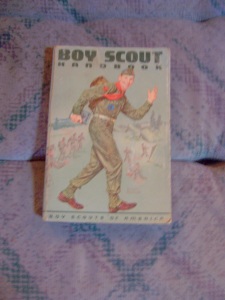 My final stop of the day was the Cimarron Canyon State Park.  It is way up in the mountains and has a beautiful campground.  There are no electric/water hookup sites, but again I didn’t need one and besides it cost me nothing with my Annual New Mexico Pass.  I found a really nice site and decided to stay here for two days.  Here is a pic of my campsite among all the trees.

This is a pic of the beautiful cliff on the other side of the road from the campground.

The Cimarron River flows thru the campground and there were a lots of fishermen.  I do wish I had a fishing license, but it was still fun to watch them.  The guy camped next to me was catching some nice size trout.  It rained up hear on and off the whole time I was hear.  It made it very pleasant to watch and listen to.

It would really be nice to visit this campground in the summer.  I heard later that there were many bears here, but didn’t see any myself.

1 thought on “A Boy Scout’s dream and Cimarron Canyon”