It was only 31 miles to my next destination at Coyote Creek State Park.  You are on a narrow road leading to the park as you can see here.

It is nestled in the mountains and  is a beautiful park.  I would have to say that this is probably the most scenic park I have ever camped in within the New Mexico State Park system.  The park is at 7,700 feet among the Sangre de Cristo Mountains and the Coyote Creek runs all thru it.   There are quite a few electric/water sites near the Visitor’s Center , however I opted for one of the developed sites further away.  Here is a pic of my home for a couple of days on my way to the Balloon Fiesta in Albuquerque.  I also have beautiful flowers right next to my campsite. 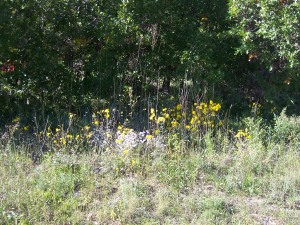 Yogi pays me a visit

In the morning of the second day I was busy working on my computer at my dinette.  All my blinds were closed except for the kitchen blind which I always leave open.  Something happened to catch my eye while typing and I looked up to see this.

There was a big Yogi Bear walking down the road directly in front of “The Breeze” (my RV).  I couldn’t believe it.  I quickly grabbed my camera and started snapping pictures.  But by the time I could get the blinds up he was gone down the road.  My heart was POUNDING.  What if Yogi decided to come back and rip into my rig?  I got my keys and put them in the ignition in case I had to make a fast getaway.  If Yogi decided to make a move towards “The Breeze” I was going to be out of there.

I looked for Yogi but had decided he had gone down the road and went back to my computer.  I decided at that point to open all my blinds just in case Yogi came back.  I call it Yogi because I don’t know if it is a male or female.

About a ½ hour later I see Yogi again on the left side of my rig only 15’ away.  Yogi was headed to the back of my campsite where I had been barbequing chicken the night before (big mistake).  Yogi walked right thru my campsite and just stood there for a minute.  I grabbed my camera and tried to snap a few pictures in between heart beats.  My heart felt like it was going to burst it was pounding so much.  I got the following pics. 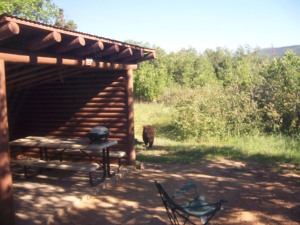 Then Yogi was gone never to be seen by me again.  That was fine with me!

With all the excitement I make new friends

About 10 minutes later two people came by with their dog.  I wanted to alert them to the fact that Yogi was in the area.  I jumped out of my rig and asked  them if they had seen a bear while on their walk.  They were coming from the same area that Yogi had wandered off to.  They said they hadn’t and I proceeded to show them the pics I had taken.

Then I realized I was standing there in my long underwear ONLY.  In my excitement I had forgot to put on my clothes.  OH WELL!!!  They probably thought at the moment I was some kind of old pervert.  After they left I got dressed and much later in the day hiked to their campsite and we have become good friends.

There is a big field next to the electric/water sites where there is a big cow pasture.  Late in the day the cows meander into a large grassy area within the park.  What an excellent way to keep the grass trimmed.  The cows are very friendly and are interested in anyone walking down that road.  Here is a couple of pics.

After the bear excitement calmed down I decided to take a hike around the park.  Here are a couple of pics of the creek.  It was a beautiful mountain stream and I saw lots of people pulling fish from it. 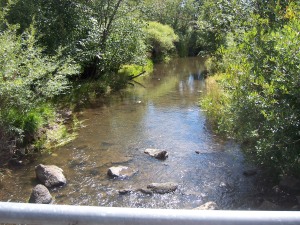 I would highly recommend Coyote Creek SP to anyone who is looking for a beautiful mountain campgrounds.  It is very scenic with nice hiking and fishing.  It was cold at night when I was here in September but I would imagine that the summer months would really be nice.  Just don’t forget the BEAR SPRAY.