I have not had good Internet or cell phone service since I left Raton, NM just south of Sugarite Canyon SP.  There I could go to the K-Mart parking lot and get a good internet connection and 3G cell phone service.  I had no service at Cimarron Canyon SP and it was very weak at Eagle Nest Lake SP.  Then I had no service again at Coyote Creek SP.  It has been about a week since I was really able to make any posts to this blog and I hate getting behind.

I like staying in touch with my family just to let them know where my adventures take me.  But I also need to answer emails, pay some bills, check how little money I have left in my accounts (OUCH!), check reviews on where I am going next, ETC., ETC., ETC.  You know the usual internet stuff!

I heard Storrie Lake SP had good internet and cell phone service so off I went.  I found a great campsite overlooking the lake and that became home for a few days.  It was only 38 miles from Coyote Creek SP but it was 1,100 feet lower and out of the mountains where I had excellent reception.  I was able to get all of the things done that I have been putting off for over a week now.  Here are a couple of pics of my campsite and Storrie Lake. 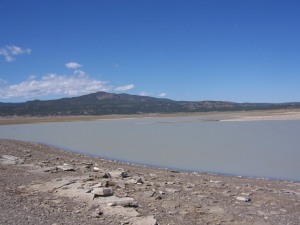 Dave and Karma beat me here

My newfound friends from Coyote Lake SP, Dave and Karma, were here when I arrived.  They were the ones I greeted in my long johns after the bear encounter at Coyote Creek SP.  I had gone up and visited them later at Coyote Creek and we had discussed where we were headed down the road.  I guess they decided that almost 21 days at Coyote Creek was enough and they headed down here.  I had to stop at Wal-Mart in Las Vegas so that is how they beat me to their site.  I got a beautiful site just 2 sites down from theirs.  We had a great time getting reacquainted.  The are from Nebraska and came to Taos, NM so Karma could have some surgery done on her shoulder and have been in NM ever since.  They also purchased the Annual Pass and are enjoying the benefits of owning it.  Here is a pic of the Three Amigos having a good time.  My hair looks crazy I know, but just got out of the shower.

I have been wanting to contact Amazon, my seasonal employer this winter.  They are very good at sending me emails keeping me appraised of everything that must be done prior to starting work.  I will be working in Fernley, NV starting on Oct 30.  I contacted my rep as I wasn’t sure of the start date they had furnished me since the 30th is a Sunday.  She did confirm that it was the correct day and I did start work for them beginning on Sunday.  They also allow me to come into the park two days before my starting date and pay for all the park fees the entire time I work for them. NOT BAD EH!

I also had to contact my medical insurance broker to finish some business with him.  Then I had to contact Mike and Lisa Sylvester (the RVGUY) to schedule my annual appliance maintenance and also to check out a couple of other things.  It was good to have all this behind me!  Now the only thing left was to bring my blog up to date.

Don’t be in such a darn hurry Jimbo!

My insurance broker was sending me a package of items I had to sign.  I had suggested that he send it to Villanueva, NM where I would be stating at the state park down there.  He told me he could send it to me Priority Mail to Las Vegas, NM and I would get it sooner so I could get it mailed back to him before Oct 1.  He mentioned that I would get it on Sat.  No problem so far.  I tracked the package and sure enough the post office had it by Sat.  I packed up and left the campsite heading to the post office and then to Villanueva State Park.  NOT SO FAST JIMBO!!!  The post office isn’t open on Sat.  BUMMER!!!  I turned around and drove back to Storrie Lake SP and again parked near my friends.  I will be here until Monday morning.  I was hoping to visit a couple other state parks before I got to the Balloon Fiesta, but I doubt it now.

I have sure had a ball with Dave and Karma.  They are the kind of people who are a laugh a minute.  They pull a small trailer but are very happy to be able to enjoy the RV lifestyle.  Besides that they are much younger than me.  Oh how I wish I could have started this back when I was their age.

I invited them over to for dinner one night and made a big pot of asparagus soup from a mix.  But to make it better I cooked up some more asparagus and added it to the soup.  It was great along with some Hawaiian rolls to go along with it.  Then we watched a movie called Blitz starring Jason Statham.  It was a great movie.  This was a Netflix movie and it was fun.  Here is a pic of my dinner party.

Just before we started watching the movie the ranger came by and asked if they were Dave and Karma.  It seems that Karma’s mother was getting ready to put out an APB ( All Points Bulletin) for Karma whom she thought was missing.  They were missing all right since they have been in the mountains for the last month with no cell phone service.  Her mother had grown worried so Karma called her to let her know they both were OK.  Dave then called his father to also check in with him.  I told them that parents will worry about you no matter how old you are.

Traded in my LD for a motorcycle.

Yes folks I have made the plunge!  I couldn’t resist.  Her is a pic of me on my new wheels.

Dave Ellis came driving up just before sunset one night on his beautiful Honda motorcycle and matching trailer.  He was quite a guy.  Seems that he is from Whittier, CA (anyone still remember TRICKY DICK?) and he leaves his wife every now and then just to go traveling and seeing the sights.  His wife does not care to do this but allows him the opportunity to travel when he gets the urge.  When he pulled into Storrie Lake he had been on the road 2 weeks and was really ready to talk to anyone.  I told him I could lend an ear and flap my mouth every now and then as well so he figured this was a good place to spend the night.  By the way Dave if you are reading this please send me your email address. 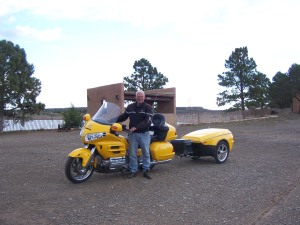 We cooked and ate our dinner together and Dave and Karma joined us as well.  Then we had a great campfire with the wood supplied by both Daves.  It was a great time with all of us swapping stories.  Dave slept in a small REI tent that fit perfectly in the small trailer connected to his bike.  He told me that he is writing a book about his adventures along the road and was going to feature me in his book and send me a free copy.  HOW COOL!!!!

Dave was gone early the next morning and was so quiet I did not hear a thing.  NICE MEETING YOU DAVE AND GOOD LUCK WITH ALL YOUR TRAVELS!!!

Small Friends came to greet me

I had 3 small friends that I instantly became attached to and enjoyed a wonderful time together.  Don’t know their names but they sure enjoyed the grub (milk) I put out for them.  Here is one of them chowing down.  They were just kittens that someone had left at the park.  Dave found the container they were left in and I wish they would allow me to adopt them but they weren’t interested.  I got this pic of one of them.

View of lake and beautiful sunsets

Got these views of the lake and of course the beautiful sunsets.  As always, the New Mexico sunsets are spectacular!!! 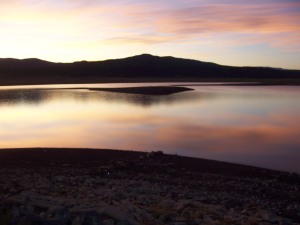 4 thoughts on “Fun and Friends at Storrie Lake State Park”