Saturday Andrea and I drove over to the WIN’s (Wandering Individuals Network)  Ice Cream Social off Palomas Rd north of Quartzsite.  The WIN’s had invited all the LOW’s (Loners on Wheels), Escapee SOLO’s and the Escapees Boomers groups over as well.  They had lots of ice cream and it was really a fun time.  I did catch up with a few of my friends in the LOW’s group and it was fun chatting with them. 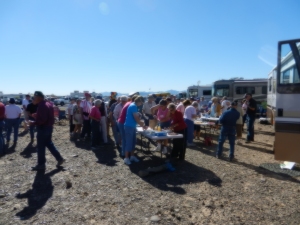 Final Upgrades to “The Breeze”

I finally purchased a couple more of the LED lights to go into my rig.  That will be the last of my purchases for this winter.  John installed my RV Motion Sensor light which replaced my existing porch light.  Later he adjusted it so that it wasn’t too sensitive.

Roger installed the LED lights that replaced the fluorescent tubes.  What a difference.  One LED gives off more light than two fluorescents.  Thanks go out to both Roger and John for all their help.

We had our last campfire and burned up the remainder of the wood that John supplied from his property in Colorado.  We sure had a lot of campfires from all that wood.  I also took a pic of the sunset.

I got up early to bid farewell to all the people who were leaving this morning.  I even got to see this beautiful sunrise. 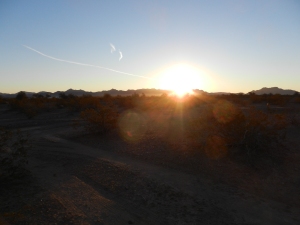 There were six people and three dogs who departed this morning.  They were Ed and Carol (and gopher), John and Linda (and Sadie), Roger, and finally Steve (and Jiggs).  We all had a wonderful time together and they will be missed.  Annie and Rick (and Dweezle) were going to leave but Rick was feeling much better from whatever was ailing him and the day was so nice they decided to stay another day.

Tonight at our Happy Hour was Ann and Jerry, Chuck and Beverly, Annie and Rick, Andrea and I.  We had a nice time but it was a bit quieter.