There are wild donkeys all over the Imperial Dam area.  Everywhere you go you see evidence of them.  There are many donkey trails throughout  the area.  Finally we had some donkeys come into our area while we were having “Happy Hour”.  They are very friendly but it is against the law to feed them.  I heard it is a $500 fine if you are caught. 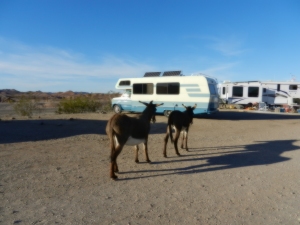 One of the donkeys was pregnant and looked like she was about to pop.  They strolled around to many of the rigs including mine but once they discovered that they were not going to get a handout from any of us they quietly moved on.  They were very tame and there was nothing to be afraid of.

The last Thursday I was at Imperial Dam I again met up with the group to go hiking.  We all had to hitch a ride to our next hike which was called the Painted Desert.   It was about 10 miles away past Martinez Lake.  There were about 22 of us just the same as the last hike.  It was only about a 2-3 mile hike but it went up and down the local hills and thru the washes.

This pic shows part of our hiking group.

I believe this is call a hoodoo.  This was the only one I saw along the trail. 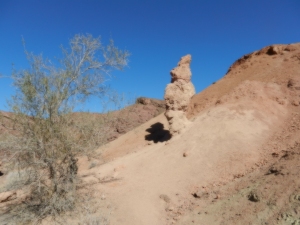 The trail was very up and down among the hills.

This was one of the honeycombs we say in the rocks.  You could also see the bees flying about. 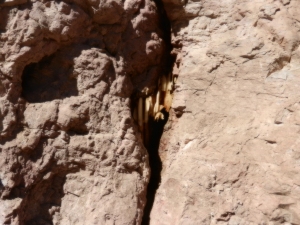 On of the many washes we climbed thru.

The temperature was about the mid 80’s and it was quite hot.  It sure was nice to find some shade when we stopped to have lunch.

This is part of the group checking out a large cave we discovered. 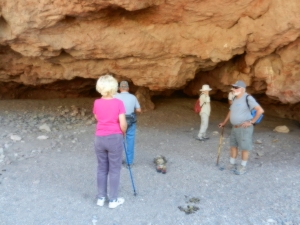 It was a great hike and glad to get the exercise.

On to Baja Wine and Whales Tour

The rest of the week was spent getting computers (both old and new) and preparing for the Baja Wine and Whales Tour that starts Sunday afternoon.  The tour is gathering at the Portrero County Park just north of Tecate.

I will post whenever I get a chance but it may be sporadic since I probably won’t have Internet access all of the time.