On my way to Alabama… Alabama Hills that is….

Today I drove 132 miles to Lone Pine, CA where I plan to stay for a couple of days in the Alabama Hills.  I stopped at the Inter-Agency Visitors Center going into town to pick up a freebie map of the Alabama Hills and also signed up for a fire permit.  The permit doesn’t cost anything but if you are having any kind of fire outside of your rig (such as my gas barbeque) you are required to have it.

Then I drove down the Whitney Portal Road to the Movie Road.  It then turns into a gravel road with many small roads leading to places to camp.  The roads are very narrow so I parked my rig in a good spot and hiked down several of the roads so I could find a good spot.  I did find a great little place back among the rocks.

Camped where they filmed Gunga Din

While relaxing in my new found campsite I overheard 3 people on horses mention that this spot was used in the original Gunga Din movie set.  I saw several people on horseback riding all through this area.  Here are a couple more pics taken around my campsite. 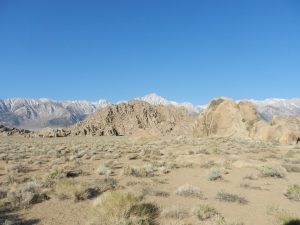 The Alabama Hills are so unique.  They are oddly shaped rocks everywhere, some very small and others are huge.  This is public land managed by the BLM Bishop Field Office.  There is dispersed camping just about anywhere, although they tell you to use an existing camp and fire-ring.  According to the map there are over 50 movie productions filmed here annually.  Many of the old westerns were filmed here as well.  There is a Museum of Film History located in Lone Pine where you can pick up the exact location of 10 classic movies.  The movie industry adds quite a bit to the economy here in Lone Pine.  I took a hike all through this area the next day and found some really neat areas. 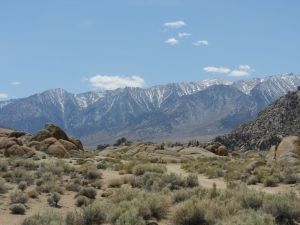 I even found some desert flowers in bloom.

I also found this cave that contained a fire pit.  It looked like it had been used a lot for a fire as the roof of it was all black.

What a funny looking guy!

There was also a rock formation that looked like someones head only with a really crooked nose.  HA!

This is a really beautiful and there were many spots where you could camp and really get away from it all. 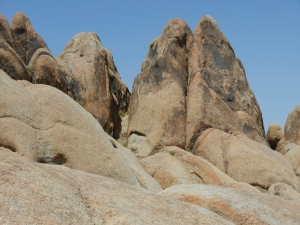 I stayed here two nights.  I would have liked to stay longer but I have my work commitment in Oregon.  I would definitely recommend this area.  After leaving I went to the Lone Pine Film History Museum in Lone Pine.  It only cost $5 to get in and it was well worth it.  They had posters of many of the movies that were filmed in this area.  This was a display they had where they made the movie Gunga Din. 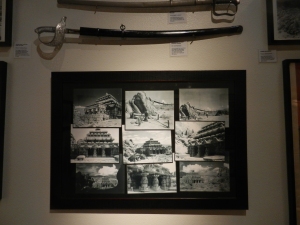 It was a great weekend even though I couldn’t get cell phone or internet service.  Maybe that was why it was so good!