A sad time in our history…

Today started off on a sad note but ended on a spooky one.  I know that sounds weird but today was an unusual day.  North of Lone Pine I stopped at the Manzanar War Relocation Center.  This is where 10,000 Americans of Japanese descent were relocated during World War II.  They were removed from their homes and business and with only the clothing they could carry were forced to remain here throughout the war.

This is the entrance and a guard shack where they were closely watched so that they couldn’t escape.  The only reason they were isolated here was because they were Japanese.  They had done nothing criminal, but the government thought they might be a problem to our security. 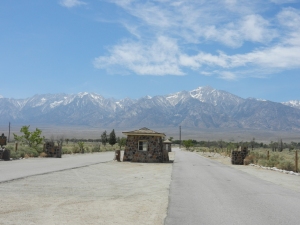 This is the main building where they had dances to try to forget about their situation.

This is one of the guard towers to prevent them from escaping.

There was a 20 minute movie narrated by many of the same people that were encamped here.  It was a real tear jerker.  Years later Ronald Reagan issued an apology to all those who were encamped here and their relatives along with $60,000 per person encamped.  But by that time they had lost some much.  Many of them owned businesses and shops which were taken away from them.

Had to stop at Schat’s

Stopped in Bishop at Schat’s Bakery to pick up a loaf of their famous Sheepherders Bread.  It is to die for!  Thanks Donna and Russ of Travels in Therapy fame for reminding me.

I didn’t really have any particular spot where I would stop for the night except to park somewhere before 4:00pm.  I passed many small towns along 395 and had heard about a dispersed camping spot at Mono Lake so I decided to make that my destination.  Along the way I passed Mammoth Lakes, which brought back a lot of memories of my skiing days and how our ski club used to go up there once a month in the winter.  It sure looks different in the Spring.  Still lots of snow on the peaks but a lot of greenery in the lower elevations.

I found a perfect spot just off 395 south of Lee Vining.  It is a great dispersed camping spot overlooking Mono Lake on one side and a great look of the mountains on the other side. 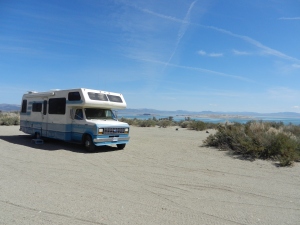 Mono Lake is twice as salty as the ocean.  Tomorrow I will hike down to check on the tufas.

Here is a great pic of the clouds rolling over my campsite.  More on that later.

The mountains were really beautiful with lots of snow still covering them.  I am at the 7,000 ft level and there is lots of wind and it is a bit colder there then the Alabama Hills.  But it is still very pleasant. 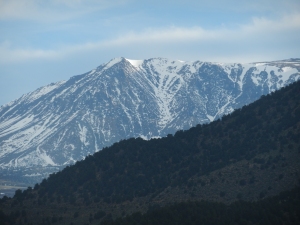 Beam me up Scotty

I went outside to take some pics before the sun went down and looked up and saw the Starship Enterprise hovering overhead.  At least that is what it looked like.  This pic is facing south and has a bit more light as it was a timed exposure.

This is the scene that really had me spooked out at first.  Yes the Enterprise was landing directly over me.  Beam me up Scotty!  I couldn’t believe my eyes.  I then googled “Mono Lake Clouds” and found out that these clouds are called Lenticular clouds and are common to this area.  But it scared the “you know what” out of me for a while.

I will be spending a couple nights here to see more of the lake, so stay tuned.

12 thoughts on “From Manzanar to Mono Lake”