Weather has been very nice

It has been almost a week since my last post and I hope to post a bit more often.  The weather here in Central Oregon is getting really nice with a few drops of rain here and there.  There is some rain predicted for this weekend but nothing so far.

Visiting with my friend jack on his adventure across America

This has been a very exciting week for me.  To begin my friend Jack stopped in on his bike tour across America.  The Trans America Bike Trail goes right past me at Hwy 26.  If I am sitting outside I can here bicyclists talking as they stop for a break.  Ochoco Divide is at the summit and it is all downhill for 17 miles to Mitchell, OR.

Jack and I met back in 2010 when I toured the Columbus Historical Museum in Columbus, NM where he was workamping.  We have been best of friends ever since and always stay in touch with each other.  This year he started to fulfill his dream of bicycling across the US.

He got to my campsite around noon and we had a great time talking about old times as well as new.  After lunch and a big BS session, he headed on down the road so he could make it to Mitchell before nightfall.

Here is a pic of Jack ready to hit the road.  Good Luck Jack.  I will keep you posted on his travels when I here more.

And he is off to the wide open spaces of this great land.

Steve on his slower adventure across America

Just a few minutes before Jack left in “walks” Steve and his goat LeeRoy.  They are also traveling across the US but in a much different manner.  They are walking!  Steve decided to walk across America to raise funds to help his friend build an orphanage in Nairobi, Kenya. 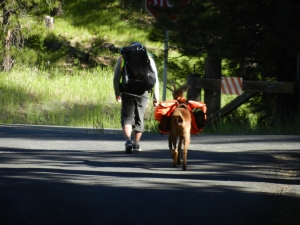 When Jack told me he would be coming by my campground I went and bought two nice juicy rib-eyes to barbeque.  When Jack got here he mentioned that he was a vegetarian.  Since I had this extra steak I invited Steve over for dinner.  I could have invited LeeRoy as well, but he is a vegetarian also.  We had a good time talking about his adventures as well.  He started out in Seattle and is going to Times Square.  People notice him wherever he travels.  I can’t imagine why!

You can read up on Steve and his travels at needle2square.com

Wednesday was my day off and I felt just like going into Prineville and checking it out.  I usually only stop at a few places to do shopping, gas and propane so I really haven’t gotten the feel for the town.  As I was turning onto Main Street I saw a green LD coming toward me.  I didn’t think too much of it as I have seen a guy with a green LD pulling a boat.  More about that later.

I found a good parking spot and decided to do some walking.  I was looking for a good book on the flora and fauna of Central Oregon so I headed to the bookstore.  I wasn’t able to find what I was looking for but just decided to window shop.  Then I looked up and saw the Bowman Museum across the street.  That was a MUST SEE.  It was a small but very neat museum that showed life in Prineville since way back when.  They had a lot of interesting railroad displays and also a great display on the Prineville baseball team at the turn of the century.  NEAT STUFF!

I then saw the Prineville Men’s Wear Store that was rich in boots, outdoor jackets, and lots of western wear.  I saw a pair of boots in there I just had to have, so guess what.  I done bought them.

After finishing up on my walking tour through Prineville I had a great lunch at the Tastee Treat.  I have eaten there before and every thing is great.  The service, the food and all the old codgers telling all their stories.

After returning from Prineville, I got settled in and made a campfire.  Then Stephany came by to introduce herself.  She was the LD I saw in Prineville as I was turning.  She owns a Lazy Daze and lives in Salem, OR.  She mentioned that she had been following my blog and right away I knew she was a very smart lady.  She just decided to come up and see how the campground up here was like.  I tried to convince her that she needs to come down to Quartzsite in the winter and meet up with our group and have a ball as we do every year.

Generations meeting for the first time

I also wanted to show you a picture of my wonderful family.  My grand-kids Eric and Rachael were visiting my son out in California.  They stayed at my sister’s home one night and went and met their Great Grandmother for the first time.

From l to r my grandson Eric, my sister Bev, my Mom, my granddaughter Rachael and finally my son Curt.  It was great they could all get together.  I just wish I could have been there as well.