As the camp host for a National Forest Campground in central Oregon I am surrounded by trees.  Both big ones and little ones as well.  In this area the Ponderosa Pines are the giant trees.  Many of them grow 200 feet tall and some even wave in the breezes.  There were two of those giant trees that had died and no longer had any leaves or branches on them.  They would have to be brought down before they fell down as they were near campsites.  Loren and Sue, the regional managers, came by one day and I met them at the trees in the back part of the campground.

Loren was going to cut down the tree and I was the gopher carrying the needed supplies such as gasoline chain saw oil, rakes, etc.  The two trees were right next to each other.  They are the two in the middle of the next photo with no leaves. 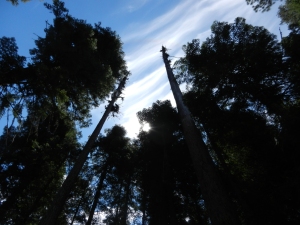 This is Loren beginning to cut down that tree.  It was a very big tree and later he found out that many ants had made that tree their home.

I made a short clip of the tree actually falling to the ground.  It came down with a big thump.  Please excuse the end of the clip as I forgot to shut it off and I was so excited seeing that big tree come down.

The tree came down with such force that the top of the tree acted like a spear and drove itself into the ground as you can see in the next pic. 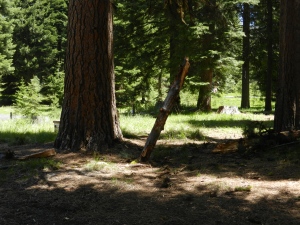 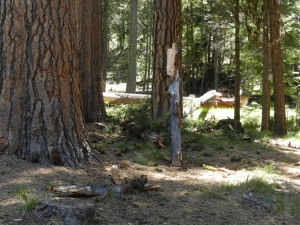 We tried to pull it out of the ground but it would not budge.  Then we cut it down so it is now a stool that someone can sit on.  Too Much!

On Highway 26 which goes right by Ochoco Divide Campground there was a state highway crew that appeared one morning.  I went done to check out what was going on.  It seems that they were knocking down trees that might be a threat to motorists (or even bicyclists like my friend Jack or even walkers like my friend Steve and LeeRoy).  These were trees that they thought could pose a problem so they decided to give them the hatchet job.

They would block off the road going either way and then then forestry service guys would cut down the tree.  Naturally the tree would come down right on the highway as you can see from this next pic.