On a big adventure to Alaska.

In July I had an interesting RV pull into the park.  As I was driving by it in my golf cart I happened to see writing all over it.  Josh was the owner of the RV.  He came down for water and I asked him about all of the writing.  It seems he has earned a full scholarship to a college in Anchorage, Alaska and that is where he is headed with his girlfriend Amy.  He was from Wisconsin and when he found out about the scholarship he decided to purchase an RV and see the country on the way up there.

All his friends had signed his RV wishing him well in Alaska. 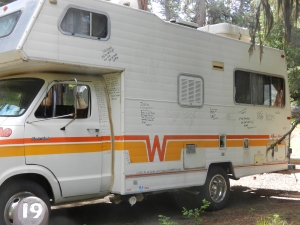 Josh was very excited about his adventure thus far.  I believe his father was going to meet him in Washington and Amy was going to return home.  Then he and his father were going to travel up to Anchorage.  He even let me sign his RV.

Here is a pic of Josh and Amy.

Prior to their leaving I had remembered a ski jump suit I had received from my good friend Randy.  He had bought a new suit and gave it to me.  It was a very expensive jump suit.  I have already dispensed of all my ski equipment except for that jump suit.  Randy didn’t want it back and told me to sell it on Ebay.  I have been carrying it in my overhead for some time now and rather then sell it I decided to give it to Josh where he could make good use of it during the long Alaska winters on the ski slopes.  He was very excited and thankful.

8 thoughts on “North to Alaska!”