To California and Back

It has been a while since I last posted and I apologize for that.  I spent the last 11 days visiting family in Southern California.  I hadn’t even planned on driving there but I had to sign in at the Elks Lodge in Oceanside where I transfered my membership.  The Elks that I originally joined was in Benson, AZ but they were closing that lodge due to lack of new members.

I was also able to visit my mom several times and went out to lunch with my sisters on Valentines Day.  I even got in a round of golf on the last day I was there.  It will probably be a while before I get back there again so it was really a great visit.

By the way I drove my new (to me) Sammy (Suzuki Samurai) over there and back.  It was almost 400 miles one way.  Although I don’t intend to drive it that far again it handled beautiful.

Dish Network up and running

Yesterday my friend Phil came over to see where I had been.  Hopefully I will be working for either he or Sindy at the ballpark when the Spring Training games start on Saturday.  He helped me lift my Satellite dish on the roof where I was able to attach it to the bracket.  I tried doing this myself, but it was just too awkward.

I hooked everything up and it found the satellite very quickly and I had TV.

Employee Orientation and then first ballgame

I have an employee orientation tomorrow where I find out all the details about my job such as where I will be working and what I will be doing.  Then the first game is Saturday with the Angels playing the Cubs.  I am really looking forward to it.

Dropped by the stadium where I will be working

I decided after lunch to drop by the Tempe Diablo Stadium and see if I could get some pics.  I was hoping they would be practicing at the stadium but the players had closed practices in the other fields in the area of the stadium.  I managed to get a few pics of the stadium as well as a couple players.

There were a lot of photographers taking many pics of Mike Trout. 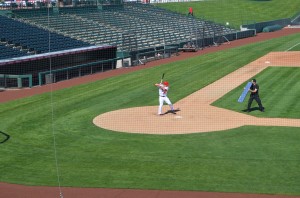 This was a banner on the road to the stadium.

I was hoping to see some batting practice but will have to wait until a later time.

5 thoughts on “Back from a California visit”