I am still working the Angels Spring Training games in Tempe.  It has been fun and I am meeting a lot of fun people.  I usually work 3-4 games per week.  I am not making a lot of money, but it pays the expenses.

Weather has been beautiful…

You really can’t beat the beautiful Arizona weather.  The days have been in the high 70’s with a slight breeze at times.  However it will be changing shortly as they expect the temps to dip into the low 60’s tomorrow with a possibility of rain.  There is a game scheduled and hope we don’t get rained out.  After a couple days in the 60’s it is predicted to go back into the 70’s with more great weather.

After many years of searching I finally found my soul mate.  I wasn’t even looking for her.  She just happened to run into me.  I was talking to my sister on the phone and just happened to look out and see her.  I went outside to meet her and we both knew we were made for each other.  Here is a neat pic of her. 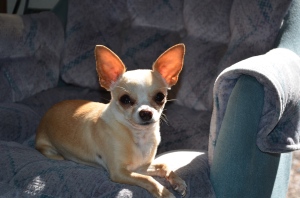 She was very hungry and had crusty eyes.  She came into my rig and made herself at home.  I have been looking for anyone that may have lost here, but without any success.  I checked with the office and they did not know who her owner was.  However she did say that there have been many little Chihuahuas running wild in the area.

I checked Craig’s List and the SPCA here in Mesa without any luck.  I have had her over 2 weeks so decided if nobody claimed her that she and I would make a nice pair. HA!!

Although I don’t think she is a puppy I have still had to housebreak her.  It was not very easy at first and there were a lot of accidents.  It was probably mostly my fault as I didn’t let her out often enough.

We have finally gotten into the swing of things as far as potty breaks go and she is much improved.  She still doesn’t bark to let me know when to take her out or even go to the door.  But when I see her sniffing around I know it is time.

Since I haven’t heard from anyone who may have been her owner, I decided to take her to the vet and have her scanned to see if she had a microchip implanted that would tell me who owned her.  They scanned her and came up with nothing.  I decided at this time that she and I would be soul mates for life so I had her checked out by the vet who gave her two shots (which she did not like at all).  They also implanted a microchip and trimmed her nails (which she also hated).  A couple of her nails where almost ingrown and it looked like they hadn’t been trimmed in a long time.  Here is a pic of her at the vet.

I have named her Chica (which means little girl).  It was a great name that my sister suggested.  We are both happy with each other and she hates when I leave to go to the ball park for the games.  She is very excited when I get home.  She is really a lot of fun and a very happy girl!