The weather last week was very strange for this area.  It got very cold and the the torrential rains and hail began.  I was working at the ballpark when it started.  The rain started on and off and it delayed the start of the game.  Then a torrential rain started with very high winds and even hail.  The stands emptied in a hurry.  This is a pic taken from inside my work tent looking out to the field.  The fans had scurried off to a protected area to get out of the rain.  This was the only guy left.  The stands were full about 5 minutes prior to this. 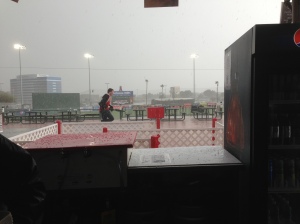 The umpires called the game and everyone went home.  All the street lights were knocked out on my way home and it took quite a while to get through the traffic.

I drove home and changed into some dry clothes and then headed over to Cracker Barrel where I met some friends for dinner.  It was a great time.  I met Jim and Sandie from Where are the Dixons, Ray and Cindy from Ray and Cindy’s RV Travels.  I also saw Kyra and Key who I had met the night before at Casino Arizona.

Key writes the The Ramblin Rivercat blog.  Then there was Jan, Dianna and Bobbie.  I copied this photo from Jim and Sandie’s blog.

Everyone had a great time and lots of conversation about places we had been and where we were headed.

Caught up with a lot of good friends yesterday.

Yesterday morning I got a call from Shannon who was my neighbor at Amazon last winter.  She was also the friend I drove with to and from Amazon.  It seems as though she just landed in Apache Junction last week and was headed my way to pick up some items at Camping World and Trader Joe’s.  We got together at Cracker Barrel for lunch and rehashed old times and made some plans to do some hiking around Apache Junction.  I am really looking forward to it.  Didn’t get any pics but will be taking my camera with me when we go hiking.

Get together at Phil and Sindy’s

In the late afternoon I was invited to Phil and Sindy’s rig, which is only a couple of spaces from mine, for hamburgers and hot dogs.  Our mutual friends, Steve and Marti and grandson Ryan, where coming by to see them from California.  It was really fun getting together with everyone.  Steve, Marti and Ryan will be going to a couple of Spring Training games while in town.

Chica is doing quite well adjusting to her new home.  She is now almost housebroken and I have here on some new dog food that the vet recommended.  That pipsqueak is so lovable.  She has to get on Daddy’s lap every night.  She doesn’t like when I leave her alone, but that will end shortly and she won’t have to worry about that any more for a while.

I took her to a park and went for a long walk.  Her whole 3.5 pounds was actually pulling me.  I have included a few pics of her doing her thing.  The first is with her ducky which she loves so much.  She also has a zombie and a chew bone, which I will show later.