Boondocking in the Gila NF

I left Deming and headed north to Silver City.  I have never been there so wanted to see what it was all about.  My trusty co-pilot Chica decided she wanted to do the driving for a change. 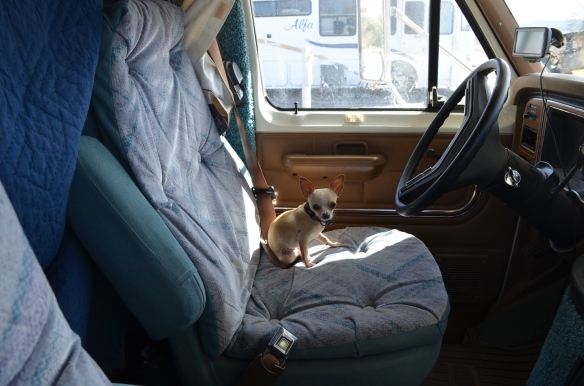 I decided that this time I was not going to let Chica lie in her bed unprotected while I drove, but put her in her carrier instead.  You would think I was killing her the way she screamed.  She yelled at me most of the way to Silver city although there were some times that she must have realized that I wasn’t going to give in and decided to sleep instead.

I stopped at the Gila National Forest Ranger Station and inquired as to where we could camp.  They suggested a few campsites about an hour from Silver City in the mountains.  That sounded good to me so I headed up there past Mimbres, NM and pulled into the Sapillo Campground.  It was all primitive sites but there were outhouses and water available.

I found a nice site and we stayed there for the night.  It is a beautiful area among the Ponderosa pines.

A trip to Roosevelt Lake

The next morning I decided to check out some of the other campgrounds close to here.  I unhooked the Sami and headed off.  I didn’t take Chica because I new I wasn’t going to be gone too long.  It was only about 3 miles to the Mesa Campground where they had electric/water sites.  The place was packed and it was not the place I wanted to spend the next couple of days.  Plus it is not on the lake so that was out.  The second campground was called Land End.  It was nice but the remaining few campsites were not very level.  So I guess we will stay where we originally stopped.  Besides the price was right and the campsites were very far apart with lots of Ponderosas everywhere.

Before heading back I turned into the boat launch area at Lake Roosevelt.  There were quite a few fishing boats on the lake and several people fishing from the shore. 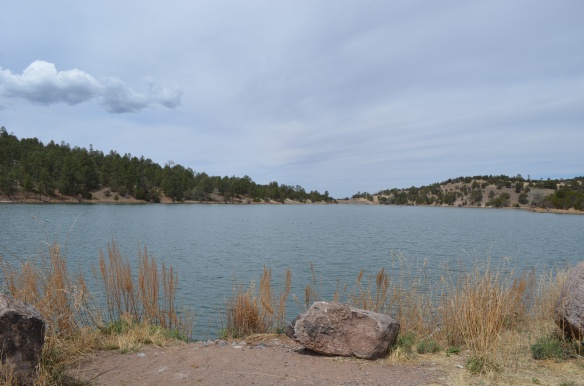 On the return trip I stopped and took a couple pics of the beautiful rock formations.  They were really magnificent.

Upon return I decided to move the rig to a more level campsite.  Chica and I went for a good walk in trying to locate a better site.  We finally found a nice spot and moved everything over to it.  It is a nice spot and close to a trailhead where we plan on hiking.

No Internet or cell phone service

The park ranger in Silver City had told us that there was no Internet or cell phone usage where we were going.  I even turned on my wifi booster but still couldn’t get any connection.  Thursday night I got out my Kindle Fire and did some reading.  It is really quiet out hear at night.  During the day there is a group with some ATV’s but they do not really bother us.

Friday night I decided to hookup my Satellite TV and see if I could get any reception.  I am in a small clearing and it is surrounded by tall Ponderosa pines so I didn’t think there was too much chance I could get any reception.  But it was amazing that I was able to get a lot of channels.  I couldn’t get all the channels and some of them were not HD but I could watch a movie at night.  By the way I do not have the dish on the ladder as I normally would.  I do not want to travel with it up there and even though it is rather lightweight it is very awkward going up the ladder holding that as well.  So I laid it on the ground.

Since I don’t have Internet I am writing this post and will upload it when I move.

Staying for a few days…

I will be staying here until Monday and then maybe head over to see Old Town Silver City.  Then I am going south to Rockhound State Park where I will meet up with Jim and Gayle of Life’s Little Adventures.   I plan on spending a few days down there before making my way to Elephant Butte State Park outside of Truth or Consequences, NM.

Below is a view taken on a short hike from our campsite.

Chica loves to go on hikes and is very curious about all her surroundings.  I would love to let her go off leash, but am concerned about any other dogs or other animals, even hawks overhead, that might look at her as if she was their lunch.

I am camped in a beautiful location with my “best bud” Chica.  The weather is perfect and we have enjoyed many short hikes around the campground.  Then when I am kicking back I can enjoy reading a good bock with Rascal Flatts or even Mark Koepler playing in the background.  I was also able to watch the Masters Golf Tournament.  It just doesn’t get much better then that.