In the “Guide to Free Campgrounds” I previously mentioned I found a park in Libby called the Fireman & Memorial Municipal Park.  They have RV sites there and the price in the guide was only $2 per night.  Plus they have water and a dump station.  That sounds like my kind of place.

I pulled it up on my GPS and started on my way.  It got me right to the place with no problem.  However economic times have changed drastically for this park.  Now they are charging $10 per night. Wow, what an increase!

I checked out my cell phone service and it was 3G so called my sister to let her know where I was located and then decided to see if I could find a cheaper spot.  Cheaper as in FREE.  HA!

I found a National Forest campground called Timberlane and figured with my geezer pass it wouldn’t be too expensive.  This showed up on my GPS and it was the closest campground to Libby.  So off I went.  But when I arrived the gate was closed.  What, no camping at the end of June!

I then looked for other campgrounds in the area using the extras on my GPS.  I had input campgrounds using the POI Factory website.  It came up with the Blackwell Flats Corps of Engineers campground.  I looked it up in the “Guide to Free Campgrounds” and it was listed and showed that there were 7 primitive sites, but no drinking water.  The cost listed was FREE.  That cost is more up my alley.  So off I went.

It turned out to be a great place with nice campsites along the Kootenai River.  What a deal.  It also had a picnic table and fire pit.  I found a great site that even had a cement slab so I was fairly level.  So this became my home for a while.

And then it rained…

We were actually almost in the clouds. 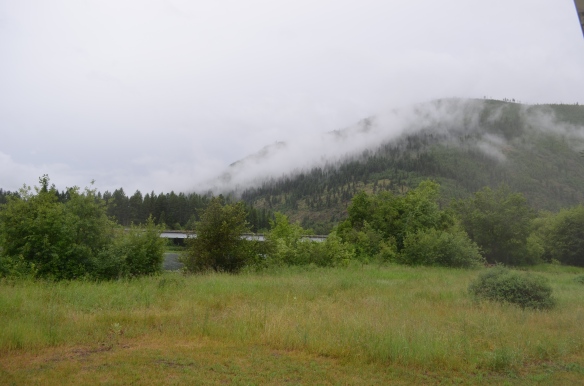 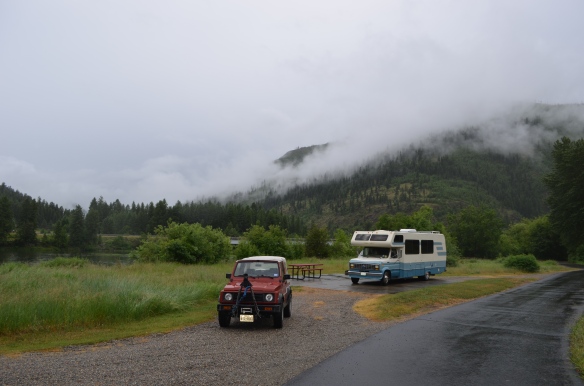 Weather is finely starting to clear up

When the heavy rain turned to a sprinkle I got this pic.  You can see the river flowing about 50 feet from us.  It is very picturesque.  I can’t wait until it stops raining.

So I cranked up my trusty Wave 3 heater and kicked back the remainder of the day and watched the rain.  The big excitement from then on was when a Corps of Engineer employee came over to tack some new reading material on their bulletin board.  It is about 100 feet from our rig.  Chica went absolutely berserk barking at this guy who is standing out in the rain.  She even started growling at him.  I wonder what she would have done if the guy happened to come over to our rig.

It finally stopped raining so got out my dish to see what I could get on TV.  I was able to get it set up and had quite a few channels.  But I am only about 50 miles from the Canadian border and it doesn’t give me all the channels.  Unfortunately I am unable to call Dish unless I drive into Libby, but my TV is out where there is no cell phone service, so I will just wait until I get in an area where both my cell phone and my satellite dish are operating.

I was all by myself here for several days while it rained.  Then a motorhome drove in here and parked and has been here for two nights.  Yesterday two more campers came by so the place was getting busy.  But this morning, everyone was gone but the motorhome and me.

I am planning on staying here until I need to dump, then I will go into the Fireman’s Memorial Park in Libby where I will stay for the night.  While I am there I can dump my tanks and take on fresh water.  Then I will move to another Corps of Engineers park called Dunn Flats where I can also camp free.  Dunn Flats COE is about ½ mile from here on the other side of the river.  I am in no hurry to get back on the road.  On the Alberta trip we were on the move quite often, sometimes every day.  I am in the mood to just settle down for a while, do some hiking and sightseeing in the area, and work on my rig.

Yesterday I had repaired a 12V bulb that had broken off in its socket.  I had to scrape all of the glass out of it.  I had a 12V bulb but it was too big so bought one at Ace.  I have been cleaning my rig and also need more cleaning supplies.  I also need to get all the dust out of it after the 2500 mile trip through Alberta.  I also organized my passenger seat compartments.  Now everything is at my fingertips while I am driving, including Chica.

The past couple of days have been very overcast although it has stopped raining.  Today I got up to bright blue skies with hardly a cloud.  Here is a pic of the Kootenai River as it flows nearby my campsite. 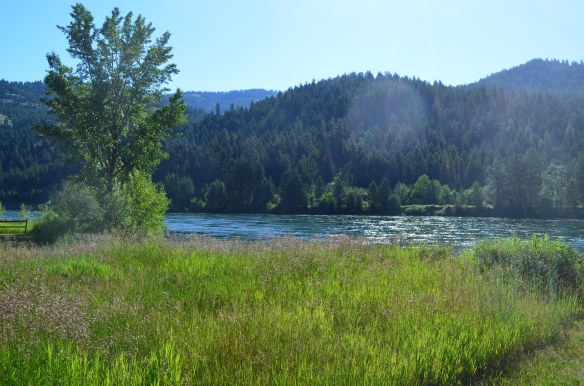 This is my campsite for the last several days and many days to come. 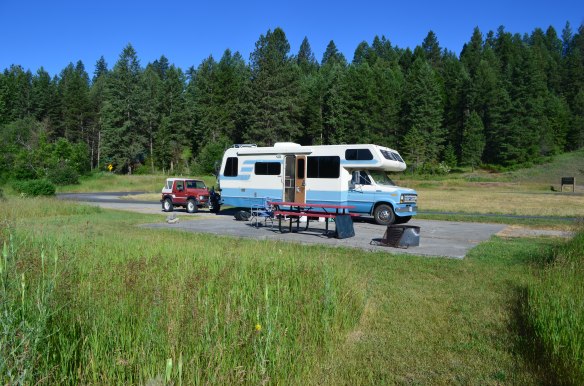 I am trying to post more often, but my poor Internet reception does not allow me to post until I drive into Libby, which is about 17 miles from here.  So I will post as often as I get into town.