Out of the forest

I decided it was time to descend out of the forest and head on down the road.  I have been in the Warm Springs Campground for 4 days and figured that was enough.  Besides I had to find a dump site and get some groceries.

I checked the atlas and noted that the Sula Country Store and RV Park was only 5 miles away so I headed out of the Bitterroot Forest for the last time and drove over to the country store.  It was a quaint little spot just off of highway 93 and a full hook-up site was $25.

I pulled in and found a pull through site so I wouldn’t even have to unhook the “Sami”.

It was nice and cool here and didn’t even have to run the A/C.  The store was very small and everything was rather expensive so planned on hitting a Walmart soon.

This place is right on the Bitterroot River and you could walk right down to it.

Treated myself to a great breakfast

This little country store had a restaurant as well that was open for breakfast and lunch.  Since I didn’t have any breakfast fixin’s left in my rig I decided to have someone else cook breakfast for me.  Two eggs over easy, sourdough toast, bacon and coffee.  YUUUUM!

Oops – took the the wrong turn

When I left the next day I filled up with gas and turned left on the 93.  My goal was to turn east on the 43 over to Wisdom, MT and then up to Butte, MT.  I wasn’t paying much attention and continued down the 93 for a ways then realized I should have turned right coming out from the gas station.  By this time I had climbed up a rather steep pass and almost down the other side.  I didn’t want to have to turn around and go up that pass again so checked the atlas to see what was available in Idaho.

I passed a recreation site but it was right off the highway.  Then I came to Leadore, ID where there was a ranger station.  The nice lady inside told me of a couple of spots.  One was a forest service campground about 10 miles up into the mountains and the other was a BLM site about 4 miles out of town.  Since I was only going to stay one night I opted for the BLM campground.  It was a nice little campground and again had a stream running about 20′ from my rig. 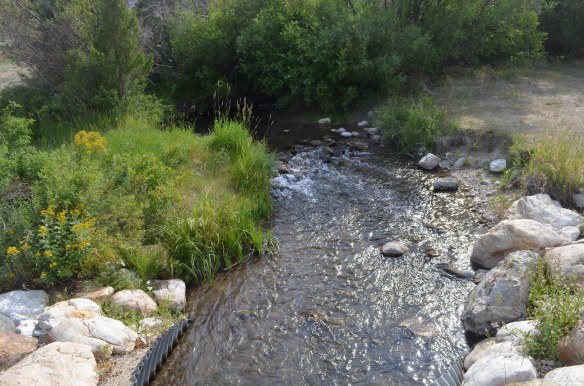 It was also at the base of the the Beaverhead Mountains, which run along the Continental Divide. 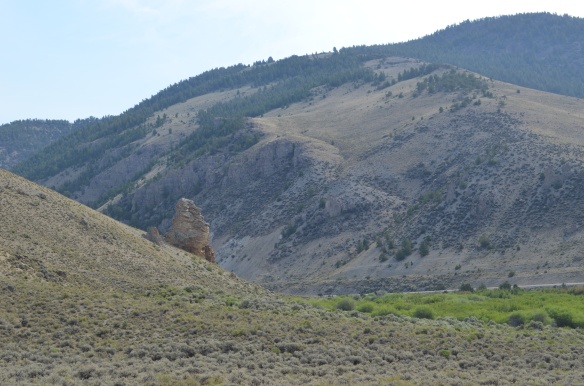 There was a old mine around there somewhere and I happened to spot this old miner’s cabin while on a hike.

It was very dilapidated.  I walked around the cabin to see if I could find any relics, but all I saw were a bunch of ammo shells.  Someone else must have cleaned it out.

I am very careful to always have Chica on her leash, especially in campgrounds and around other dogs.  I am also aware of birds of prey such as hawks or eagles.  There was another couple camping but they were at the far end of the campground.  I also didn’t see any hawks or other animals in the area.  So I let her off her leash for a short time.  We walked around and with a bit of coaxing she walked out on the bridge to see the creek.

Then I let her run.  Chica loves to run and she will run circles around me. 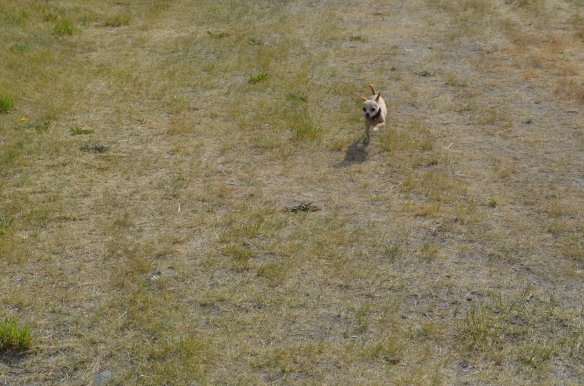 Then when she is finished running she heads straight for the rig.

It was really a fun time.  Tomorrow I will head to the Walmart in Idaho Falls, ID to pick up some supplies and then who knows where I will be.