This was the third year I have been the Camp Host at Lake Harriet campground in the Mount Hood National Forest in Oregon.

This was my third year hear and I am beginning to see a lot of the same people who come here year after year.  Many of them have become my friends and some of them I meet with after leaving Lake Harriet.

I love this campground as it is not real big (only 11 campsites) and is rather easy to take care of.  It is also on Lake Harriet.  The only problem I have with it is that there is no outside communication such as cell phone and Internet.  I do have a landline provided by my employer PGE for emergency use, but have to drive about 26 miles before I can connect to my cell phone.

Chica is very used to this campground as well.  She stays in my campsite and never wanders off.  She loves just lying in the sun. 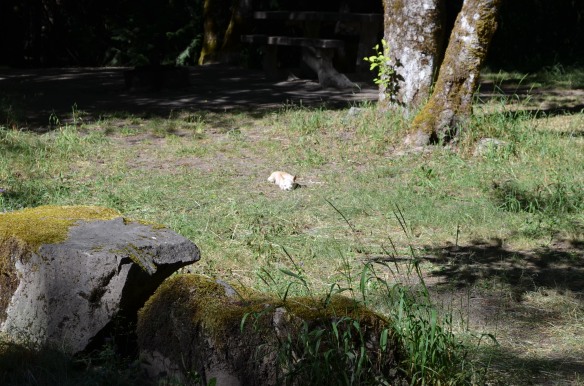 I didn’t have a pack rat problem this year.  I kept checking under my home but no evidence of any pack rats this year.  But I did have a problem with mice.  I think they were getting into the cab somehow as that is where they seemed to be coming from.  Sometimes I would wake up at night and turn on a dim light and they would scamper off.  I know Chica could smell them, but they didn’t seem to make any difference to her.

I got some traps and set them up around my pill dish.  I would wake up and nothing was in the trap and the capsule was gone.  Then I had to get creative with the trap.  I put up a barrier all around the pill dish leaving only one entry/exit available for that critter.  AHA!  In the middle of the night I had a loud bang.  I got up and sure enough I got him.  Here is a pic of the creature with my vitamin D capsule in his mouth. 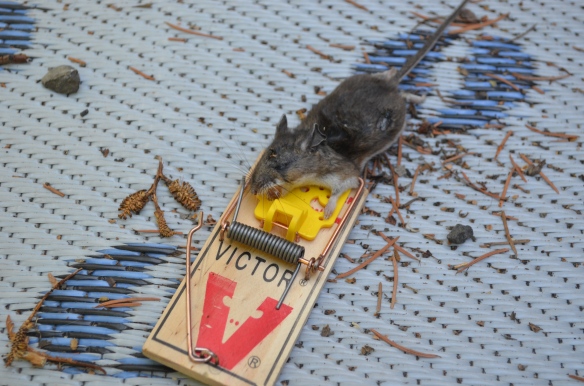 Then I started using peanut butter on the trap.  Mice LOVE peanut butter!  I got another one the following night, reset the trap and got another one 20 minutes later.  This was getting easy.  Then I found out why I was getting them.  I found some chocolate lying around that I didn’t know was there.  I got rid of the chocolate and after killing 7 mice, I finally put a halt to them coming into my rig.

Clearing out of camp

I worked through Labor Day and then I had help the following day (Sep 5) clearing out all the signage, unsold firewood and my cleaning supplies and small shed.  I then started working on getting out of there.  It took me most of the afternoon and I didn’t leave until around 3:00.

The last two years I have stored my RV in a gated storage facility in Estacada about 31 miles from the campground.  I was going to store it there again this year and talked to the manager about saving me a place.  He said he might have to block my rig in since he was also having another rig stored there as well.  I did not like that idea at all.

One of my campers who I got to know quite well offered to let me store my rig on his property (2 acres) for the entire winter for nothing.  He lived in Gresham which is about 20 miles further than Estacada.  What a deal!  He said I come come and go anytime I wanted, so I took him up on his offer.  I drove the rig there and we got it all settled in to it’s winter home.  I will take a pic of it the next time I am out there.

I was scheduled to work until 9/17 but I asked my boss if they wouldn’t mind if I left on the 5th if I got everything done at the campground.  They stopped taking reservations on Labor Day, but campers can come in every year after the campground season closes and camp for free.  There is no gate and we still get a lot of fishermen and hunters in the fall.  My boss had no problem with me leaving early so I was out of there on the 5th.

I had to leave early because I had scheduled my next trip starting Saturday the 9th.  This trip was going to be different from past trips since I would not be traveling via RV.  Instead I would be flying.  I booked a trip to Ireland and was leaving from Portland on Saturday.  This is a trip I always wanted to take, but hadn’t even thought about it until the summer.  Between my part time job in the winter and spring and my summer camp host job, I had saved enough to cover the trip.  So I was off to Ireland.  I will cover this trip in my next blog.