Many people utilize the Verizon Air Card UMW190 to connect to the Internet while traveling. It is a great tool and with some exceptions you can usually get online anywhere. I have used it for 2 years and was happy with its ability to wander the Internet. I read email, pay bills, purchase stuff online, read blogs and watch movies on occassion. However there is only one drawback to the air card that really irks me. It only allows you 5 GB per month.

you will NEVER use 5GB!!

When I purchased it and signed up for the 2 year contract, the sales person at Best Buy told me that I would NEVER approach 5GB. I guess he didn’t know me very well.  I not only use all of the 5GB allotted per month, but there have even been times when I go over that amount.  Then you are paying big bucks.

You ask how I am using so much bandwidth.  Well I like to watch movies and I am also one of those people that click on the little arrow within blogs that take you to a 5 minute short video.  What is so wrong with that?  Nothing except it uses up all your allotted bandwidth.  A movie can use between 1.5-2GB.  I was limited to one movie per month and if I was real careful in my Internet reading I could squeeze a second movie out of it without having to pay out the nose.

To make a long story short (HA!), my 2 year contract on the air card expired in Nov and I was hoping I could come up with a better solution for my Internet viewing.  In the meantime, I had also signed up for Amazon’s Prime Membership.  They have over 11,000 movies you can stream to your computer or tablet and many of them are FREE.  What a deal!

I contacted my friend Ed of “The travels of Ed, Carol & Gopher the dog ” fame.  He suggested I might check out the Escapees Forum for more information.  He also threw out the name Millenicom, which I had heard before.  The escapees forum has loads of information but I wasn’t sure what to buy.  But based on many of their readers I started to investigate the Millenicom 3G/4G Hotspot that so many people had mentioned.  The more I read about it the more I liked what I saw.

So I went ahead and pulled the trigger.  It costs me a total of $221.82 which includes the hotspot modem, a one-time set-up fee, shipping and the first month’s usage.  When it came it I followed their instructions and was on the Internet in no time at all.  I was staying in Fernley, NV working at Amazon at the time and I was getting a 4G signal from Reno, NV.  It was really fast.  I still had my Verizon Air Card which I disconnected and stopped using in December as soon as I got the Millenicom hotspot.  I didn’t want to cancel that service in case there were any problems using the Hotspot.  I wanted to wait until I was traveling to see if it worked as well as the Verizon.  I took it with me to SO CA and was using it there without any trouble.  I used it at the airports both in Phoenix and Las Vegas and then used it on the road all the way to Quartzsite where I am able to get a good 3G signal.

I am hooked.  They bill my credit card automatically.  The only problem I see thus far is “How much bandwidth do I really use?”  I wrote there support and asked them how I know the amount of bandwidth used in a month.  They do not have that information available online, but told me they would be happy to send me the amount if I submitted a ticket.  So when my first month was up I submitted a ticket thru their support system and they sent me a reply.

I USED 11GB FOR THE MONTH OF DECEMBER!!!  I couldn’t believe it.  With my Amazon Prime Membership I was able to watch 8 full-length movies, plus all my other Internet activities and still have 9GB left over.  If I had still been hooked to my Verizon Air Card my bill would probably have wiped out all my income for many months.

I still haven’t used my Verizon Air Card and had suspended service so I wouldn’t get billed.  I am calling them and tell them to cancel all air card service from now on.  The Millenicom 3G/4G Hotspot is the only way to go.  Now I can watch a movie or surf the Internet anytime I want for as long as I want without the constant worry about going over the limit.  I used to have an Excel spreadsheet that showed me how much I used daily and how much I have left.  I won’t need that anymore!

I have included a pic of it.  It is very small and can even fit into your pocket.  It does have a power cord but also contains a lithium battery which lasts a very long time.  It’s range is about 350 feet so you can have it in your rig and be outside enjoying the great outdoors while surfing the net. 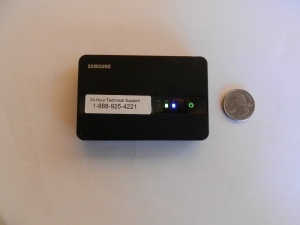