This past weekend it was blazing hot. It was 100 – 105 degrees the whole weekend with hardly any wind to cool it down. Inside my rig it got up to 95 even with a fan running most of the day. Chica and I spent almost the entire day at the picnic table under the shade of my canopy.

The fire danger is also HIGH. There was not a very big snow fall this past winter and there wasn’t much rainfall this spring. The Forest Service is not allowing any campfires is dispersed camping areas, so the only place campers can have a campfire is in campgrounds in the fire rings. 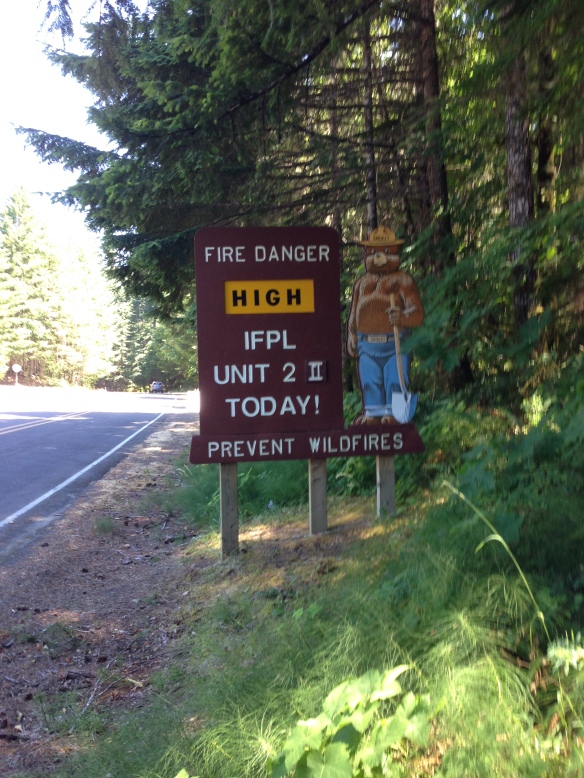 It does cool down a bit at night but it is still too warm to sleep with any covers.

Up at the crack of dawn

I was awake at 6:00am on Saturday morning (believe it or not) and decided to get up and clean all the bathrooms before anyone else woke up. Then I went back to bed and slept for about an hour before finally getting up. I’m glad I got that out of the way before the heat set in.

I picked up a hummingbird feeder at True Value when I was in town and set it up under my canopy. I got quite a few birds the first day, but was shocked when I went out to check on it yesterday. It was empty! I filled it back up and sat there watching it and I must have gotten at least 10 – 15 hummingbirds eating out of it. They were flying everywhere.. Needless to say they went through another container. These guys are really hungry!  I haven’t been able to get any good pics yet so maybe next week.

Lake Harriet campground fills up every weekend so it does keep me very busy. Most of the campers leave on Sunday so I have to make sure their campfires are out. This weekend there is only one camper left over from the weekend so it will be pretty quiet around here for at least one day. This is also the last weekend before the holiday. Next weekend should be crazy with all reserved campsites full and people will probably fill the walk-in sites by Wednesday or Thursday.

Since I did not post this last week as originally planned it is now July 4th weekend. The campground has been full four days in a row. I thought it would be a very crazy loud weekend but many of the campers are just couples with a few singles here and there. No loud noise after 10pm. It sure makes my job easier. Lots of day use people but they have to leave at 10.

I will pickup my grandson Eric at the Portland airport Sunday afternoon and he will spend a couple of days with me. He lives in Fort Worth, TX so this should be quite different for him. I am really looking forward to showing off my backyard here in the beautiful Mt Hood National Forest. He won’t be here long but hopefully I can squeeze a lot into that short time.

They will be stocking the lake with about 333 trophy rainbow trout sometime this week. Once they do that the fisherman will be out here in droves. I get quite a few camping in the park, but a lot come out here for the day and utilize the day use area. Many of them line the shores with their motorhomes, campers, etc. It can become a real zoo once they know the lake has been stocked. Some are even fishing right where they drop the fish off. They are catching them right and left. To me that seems unfair to the fish. At least let them have a chance to swim out into the lake and then use your fishing skills to catch them. Here is a pic of the truck stocking the lake. 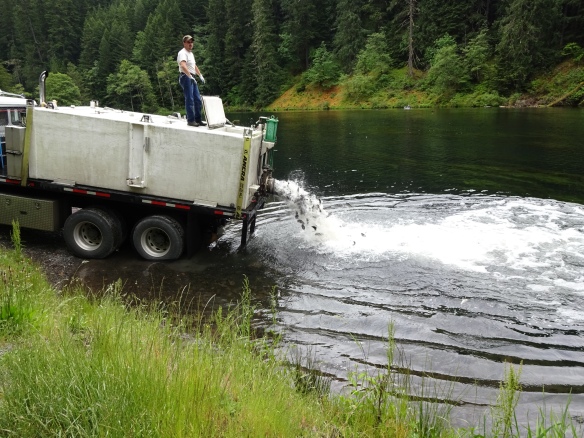 A couple of weeks ago I saw two hikers with their dog cooling off in the day use area. After talking with them for a bit I found out they were father and son out for a week long hike of the area. They had been dropped off at the campgrounds but it was too late to start on their hike. I told them we had a campsite available for the night. They grabbed it and decided to start on their hike early in the morning. The father told me he had diabetes. I took down an emergency phone number just in case nobody heard from them.

A week later they were back in the campground and took the same site for several days until their friend was scheduled to pick them up. Here are the pics of both James (father and son) and Maggie.   Maggie was huge but a big baby. 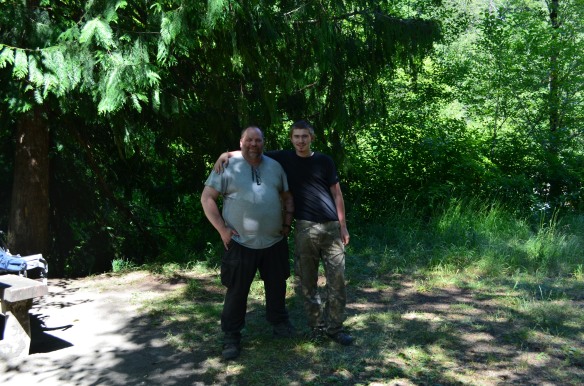 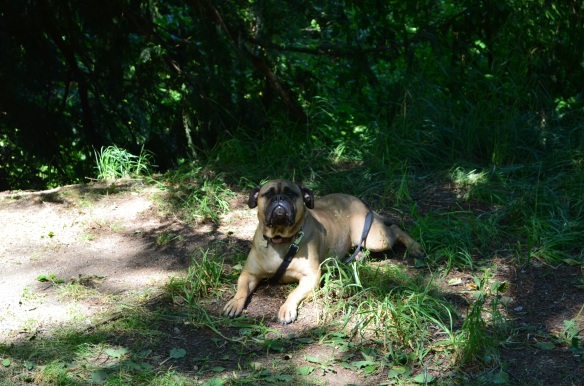 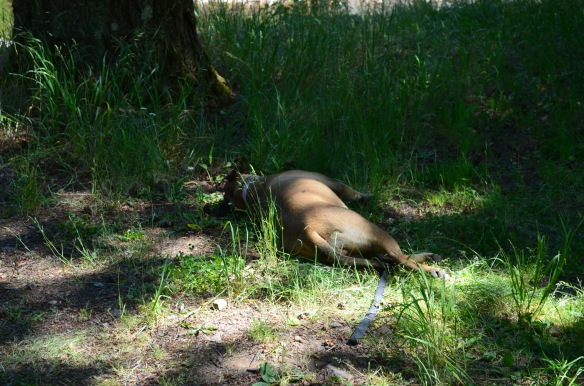 Many of the roads in the area are one lane dirt or gravel forest roads. They are not dangerous roads except when people speed. On my way to Timothy Lake I spotted this car off the side of the road. They went too fast going into a curve and the car slid off the road. Luckily they were stopped by two trees or it could really have been disastrous. It is about 300 feet or more down to the river. Of course there are lots of trees to stop them before they got down that far. I got out to check to see if anyone was still in the car, but someone else had already checked and there was a note stating “no one inside”. I am sure this car will be totaled as the undercarriage was badly damaged and just towing it out would cause a lot of damage. 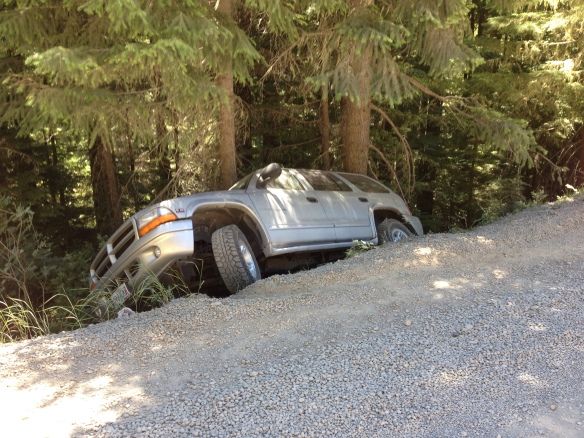 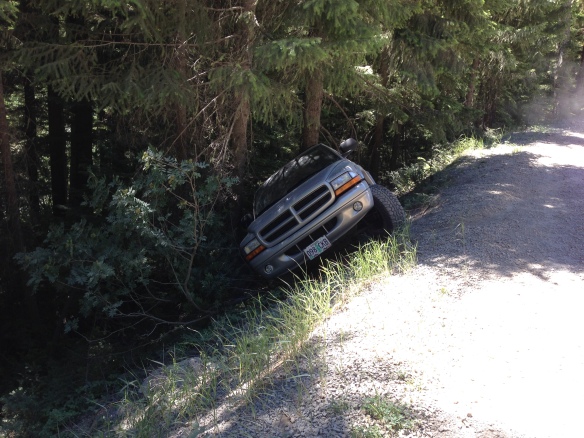 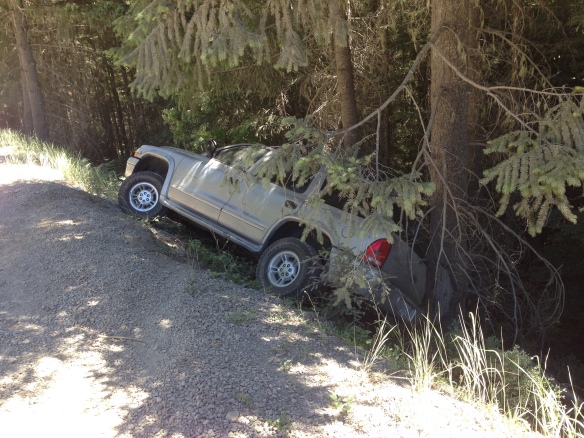 More to come next week. 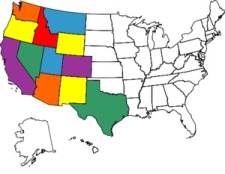 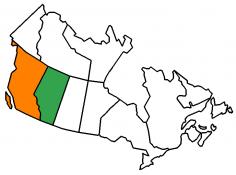