After leaving Palo Dura I crossed the state line into New Mexico.  I love New Mexico and am grateful to be back there.  The weather has been getting cooler and it is also a dry climate.  I drove to Clayton Lake State Park, just outside of Clayton, NM in the northeast corner where I found a somewhat level spot overlooking the lake.  The campsites here leave a lot to be desired as not many of them are level.  I guess it might have been better in the electric/water sites but I didn’t ever check them out because I didn’t see the need for paying the $4 per night since I have electricity and plenty of water.  I was completely by myself, with no one else within sight.  Here are a couple of pics of the campsite and the lake. 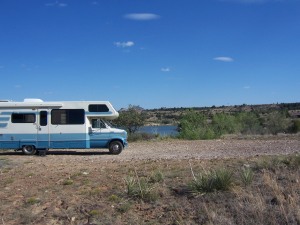 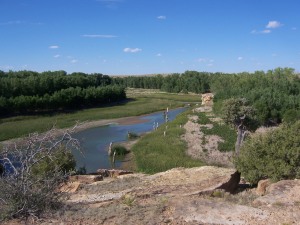 It can’t get much better then this folks…..

I fixed a real nice pork chop dinner with baked potato and green beans.  After eating I found a great country radio station from Dalbart, TX.  In case you’re interested it is 96.1 FM.   They called themselves the “Texas Red Dirt Radio Show.  GREAT MUSIC!!  I kicked back listening to this great music, sipping on a glass of cabernet, plus some “Blue Bell” ice cream and watching another fantastic New Mexico sunset.  CAN LIFE GET ANY BETTER THEN THIS!!!

I would like to have enjoyed kayaking on the lake but time was not on my side.  I still wanted to venture into the mountains and enjoy the beautiful scenery there. So I was on my way early in the morning where my next stop will be Sugarite Canyon State Park.

On the way to Sugarite there was a volcano I just had to see.  It was Capulin Volcano National Monument so with my GEEZER card I saved the $5 it would have cost me to get in.  NOT BAD!!  They asked me the length of my motorhome and I told them 27 ½ feet.  They said that anything over 27 feet had to be escorted up the volcano.  I quickly fumbled and told them it was only 26 feet and they said I should be able to make it without an escort.  It is about a 6% grade so this was a piece of cake compared to Palo Dura Canyon with a grade of 10%.  So up the volcano I went.  I did notice that there is no guard rail whatsoever and no place to pull over should you have a problem. 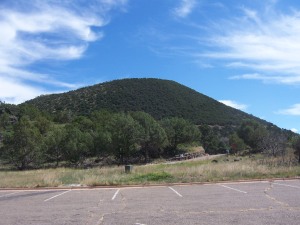 This is a view from the top looking down into the volcano.  The last time it erupted was 56,000 years ago. 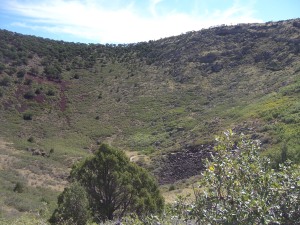 It is a spectacular view.  If you take the one mile hike around the perimeter of the volcano you can see four different states.  I decided to not take the hike.  My feet were a bit sore still from the Lighthouse Trail hike and I wanted to get on to the Sugarite Canyon campgrounds.  I did go thru the Visitor’s Center and saw some interesting rock formations.  I would highly recommend it to anyone traveling thru this area.  It was well worth the stop.

I thought you might get a kick out of this pic taken while filling up with gas in Clayton, NM.  I hardly had even enough room to pump the gas.  LOL!!!

Now I am on my way to Sugarite Canyon State Park just below the Colorado/New Mexico border.

I apologize for the numerous posts uploaded yesterday and today.  However, I have not had any Internet service for almost a week and would like to catch up.