To begin, Washington was the only state I had not visited in the west.  So I jumped at the chance to work there.  As many of you already know I signed up for the job last January while visiting the annual RV Show in Quartzsite.  I just happened upon the Hoodoo booth, since at the time I was not really looking for a job.  After talking to Rob (who turned out to be my boss) I was offered the job at Panorama Point on Baker Lake in Northwest Washington.  We went over the pay and job duties and I signed up with them.  The whole process took about 15 minutes.

Then I had the whole winter to prepare for the journey north.  The first thing I did was NOT work but spend time with my friends for a few months.  I also took the time to go to Algadones, MX for dental work.  Then it was off to see my family over the holidays, before heading north to WA.

When I arrived in the campground it was pouring rain and didn’t stop raining for several days.  I hoped I didn’t make a mistake and come to a climate that continually rained.  However the rain did stop eventually and the weather was a bit chilly but very nice.  The summer turned out to be fantastic.  It did rain a bit but nothing really bad until August when it poured and poured.

I parked my rig in a nice spot in the Panorama Point campground.

We had to drive 100 miles to orientation and then the campgrounds officially opened up on Memorial Day.  The campgrounds I was responsible for were Panorama Point, Boulder Creek and Shannon Creek.

Panorama Point has 16 campsite including the host site.  Many considered it to be one of the nicest of all the Baker Lake campgrounds.  I ran into many people who returned there year after year.  I even spoke with one man who’s father had brought their family to Panorama Point when he was eight years old and he had been coming back there every year since.  He is not 62.  WOW!

Boulder Creek is a small 10 site campground located on Boulder Creek.  It doesn’t have any direct access to Baker Lake.  It was located a mile from Panorama Point.

That is Mt Baker in the background.

Finally Shannon Creek is a 20 campsite campground at the very northern end of Baker Lake.  It is located 5 miles from Panorama Point.  It is also down 3 miles of gravel road.  This is the view I have twice a day on my way to Shannon Creek.

This is a view from the beach at Shannon Creek.  Many campers would park their cars at Shannon Creek and boat over to the other side where there were several dispersed campgrounds.

Most of the campsites are small and perfect for tent camping, but there are also many RV type campsites, especially down by the lake.

I had to make the rounds of all three campgrounds twice a day taking the money from the posts, writing receipts, cleaning pit toilets, firepits and campsites.  I also had to charge campers for extra vehicles and sell firewood.  It kept me busy most of the day.

Each camp host was assigned 2 consecutive days off where we were on our own to do what we pleased.  That was GREAT!  We still had to deal with campers that came to our door, but we could leave the campgrounds completely as I mentioned in previous posts.

However we had to fill in for camp hosts when they had their days off.  It made for a long day, but that was only 2 days a week and the days off made up for it.

Each camp host was supplied with a company truck and all the equipment that was needed.  We also had a cage that was filled with firewood for sale.  If we needed anything at all Hoodoo supplied it for us.

Hoodoo has a crew that performs all the maintenance.  That includes lawn cutting and weed eating.  They also did all the repairs on the campgrounds whenever needed.  It sure made or life easier.

Would I do it again

You bet!!  All the camp hosts on Baker Lake were invited to return the following summer at our final camp host meeting.  I am hoping to get the same campgrounds.  It was a great job and the pay was good.  I was able to save some money while also visiting much of the surrounding area.  Washington is a very beautiful state.  It was GREEN from the day I got there until the day I left.

Since my last post it has been a very busy couple of weeks.  I am learning each day how to handle visitors, cleaning pit toilets,fire pits, extra vehicles, Day Use areas, etc. etc. etc.  It has been very busy to say the least.  Even on my days off I find myself working doing this or that.

I am parked at the Panorama Point Campground, but I am also responsible for 2 other campgrounds as well.  The first is Boulder Creek Campground with 1 group site and 9 normal sites.  They also have 2 pit toilets.  Boulder Creek is only a mile down the road so I can usually check on everything there in a short time.

Shannon Creek Campground is 4 miles north with 3 miles of it on a dirt road.  This campground has 18 sites with 2 multisites.   A multisite is a bigger then normal campsite with room for several cars.  Shannon Creek also has a boat ramp with a day use area.  This seems to be one of the campgrounds most popular with tent campers although there are a few larger sites for RV’s.  Here are a couple of pics heading north to Shannon Creek.

Covering 3 campgrounds makes it a very busy day on the weekend as I usually visit each campground twice a day.

I find I spend a majority of my time checking on those campsites with extra vehicles.  One camper reserves the site and then invites a lot of family and friends to join them.  This makes for cars all over the place and I have to see that they either pay a day use fee if just spending the day or an extra vehicle fee if they are staying overnight.  Some campers can fit 4-5 cars in a campsite.  HELP!  But most people have no problem paying the extra fee.

Most of the campsites are reserved online through recreation.gov.  I have to put up signs showing that the person indeed reserved that site.  I don’t have to collect any fees for these sites since the customer already payed online.  I just have to collect the extra vehicle fees.

Both Panorama Point and Boulder Creek were totally full with only a couple of sites left in Shannon Creek.  Friday it poured rain all day and I think it kept a few campers away.  Saturday was beautiful and then it rained on Sunday and Monday.  LOTS of MUD.

Concrete is a very small town and located 19 miles south of the campground.  Prior to the Memorial Day, I spent my day off in Concrete doing my laundry.  It is a great laundromat and also met one of my fellow host’s who was also doing her laundry and another workamper who works down the road at an organic farm.  She was very interested in working at Amazon so I had to fill her in on workamping there. 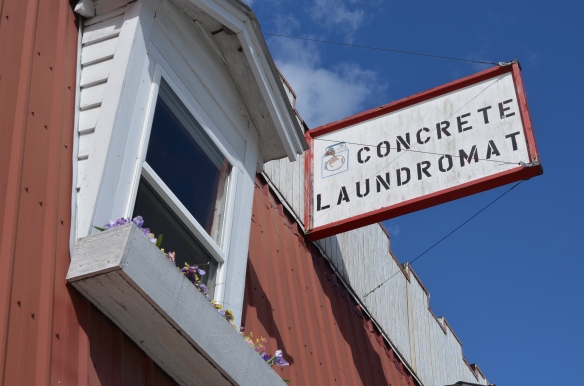 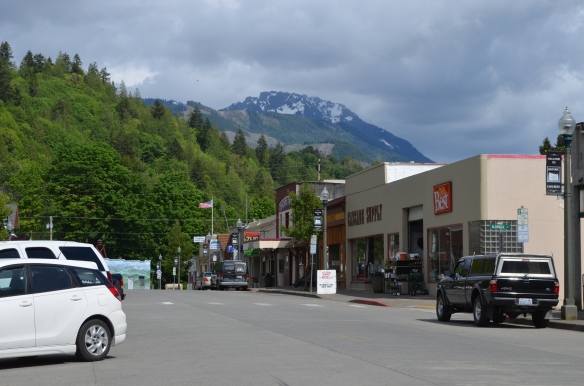 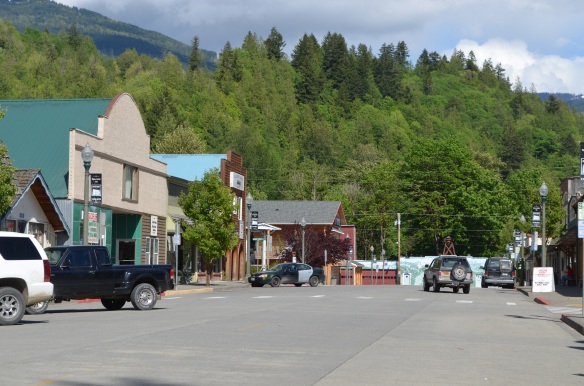 It is a rather old town but has most of what I need such as small grocery store, post office and a great little diner.

When driving south on the bridge on a clear day, you have a fantastic view of Mt. Baker.

My friends drop in

This past Monday Marti and Charlie as well as Kay and Paul all dropped in to see me after attending a Lazy Daze Northwest rally.  It was really good seeing them but the weather was not cooperating.  They set up a tarp in the Day Use area and we had a great Happy Hour.  I got lots of tips from everyone for places to see up in this area.  After Happy Hour they picked up the tarp and walked it down the road to my campsite where Marti and Charlie are letting me us it this summer. 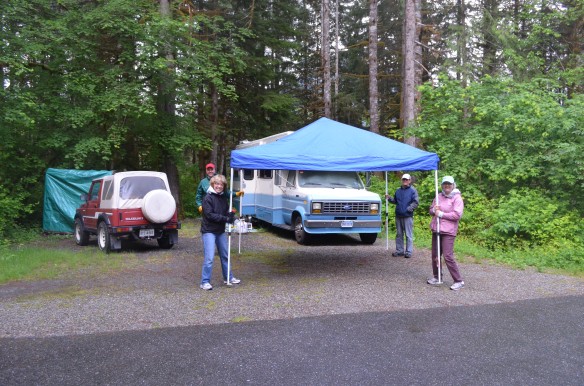 I wish I had my camera with me as they were walking it down the road.  It was a riot. to see.  Thank you Marti and Charlie for allowing me to use it.  Also thanks for the wine and brewskies.

I am posting this from the Burlington, WA library.  There is also a Fred Meyer here as well where I will be doing any major shopping.  I will try to post more regular, but I have to go into Concrete where I can get a 4G connection.  The connection is 3G at my campsite and that is with a booster, but it is very intermittent.