Our first overnight in Alberta

We stayed at the Crowsnest Pass RV Park for two nights.  That gave us time to do some sightseeing in the area and washing dirty clothes as well.  We have been doing a lot of driving everyday and a break in that schedule sure is nice.  It gives you time to relax a bit.

We drove over to the Frank Slide Interpretive Center.  Frank’s Slide is Canada’s deadliest rockslide. It occurred on April 29, 1903 when 30 million meters of limestone from the summit of Turtle Mountain came crashing down on the town of Frank.  It covered much of the valley below and many people were killed.  These are pics taken from the Interpretive Center.

This is a great view of a snow-capped mountain in the distance.  No I have not painted my LD.  It was another member of our group.

We saw two movies in their theater.  One covered the history of the area and the other was all about the slide.  They were both very interesting.

Then we were off to the Hillcrest Mine Disaster Cemetery.  This was a very large cemetery for all the local people.  It also paid tribute to the many miners that were killed in the coal mining mishaps. 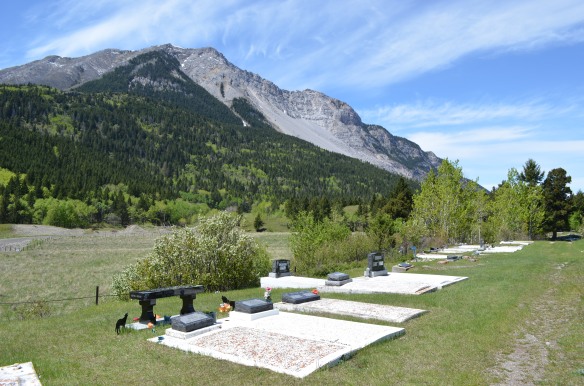 This cemetery has been here for a very long time and many of the very early grave-sites were caving in.

Then it was back to the rig where we washed clothes and just plain relaxed.  I am not sure what the temperature was but it was very nice out in the sun.  I looked at our mileage since we left Salida, CO and John, Linda and I have traveled 1,788 miles.  Much of it was day after day so it felt very nice to just sit and gab.

The RV park only has two washers and two dryers so everyone was busy.  We had to get change as the washers took two loonies ($2) and the dryer took one loonie and two quarters($1.50).  I am not sure why they were using quarters for the dryers, but that is what it is.

Starting to get used to some of the exchange rates and the Canadian currency, but still have a long way to go.  I will probably have it figured out by the time we leave Canada. HA!

Tomorrow we will be traveling up Highway 22, which is known as “The Cowboy Trail” to Cochrane, AB.  It is only a short trip of 141 miles so should get there in no time.  We will be in cattle country.