I planned to fly back to CA to spend Thanksgiving with my family.  I began heading north to Albuquerque where I was going to catch a flight to Orange County.  I was on my last campground at Elephant Butte State Park before leaving for Albuquerque when I got a call from my friend Jack to meet him at the Bosque del Apache National Wildlife Refuge where the annual Festival of the Cranes was taking place.  He had located a campground just a few miles from the refuge.  So I was off to the refuge.

Once I got there and checked in we both took our rigs through the refuge (which was free using my America the Beautiful Senior Pass).  What a place!!  You could drive through the refuge and stop anywhere to view the wildlife.  Our first stop was a pond where we saw thousands of Snow Geese.  They were everywhere making lots of noise.

Farther along we came across a corn field where the Sandhill Cranes were feeding.  The Sandhill Cranes feed on the corn during the day and then migrate to the safety of the ponds before sunset where they will stay all night.  This protects them from the coyotes.

The cranes fly in packs to the ponds.  They look like planes coming in for a landing.

I was able to get a pic of the sun setting over the pond.

The next day I checked out the Visitor’s Center where they had all kinds of displays that related to the wildlife in the refuge.  There were many people that brought injured owls, and hawks that had been found that they nursed back to good health but were unable to survive in the wild. 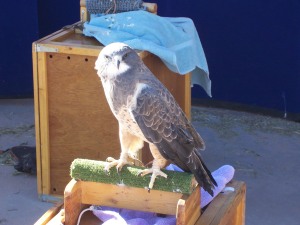 Even had a beautiful wolf that was very tame.

Here is a Red-tailed Hawk.

This turned out to be a wonderful weekend.  I learned a lot about the wildlife and how the Wildlife Refuge works.  Thanks Jack for calling me and let me know about this event.